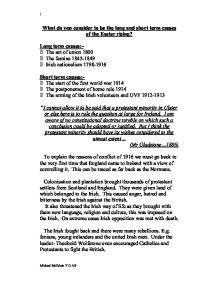 What do you consider to be the long and short term causes of the Easter rising? Long term causes:- * The act of union 1800 * The famine 1845-1849 * Irish nationalism 1798-1916 Short term causes:- * The start of the first world war 1914 * The postponement of home rule 1914 * The arming of the Irish volunteers and UVF 1912-1913 "I cannot allow it to be said that a protestant minority in Ulster or else here is to rule the question at large for Ireland. I am aware of no constitutional doctrine toreble on which such a conclusion could be adopted or justified. But I think the protestant minority should have its wishes considered to the utmost extent... (Mr Gladstone...1886) To explain the reasons of conflict of 1916 we must go back to the very first time that England came to Ireland with a view of controlling it. ...read more.

However it is set an historical trend of Irish rebellions against the British. The penal laws attempted to take away Irish identity e.g. not allowed to practice there religion, language, culture etc... This caused anger and resentment and desire for revenge. The act of union in 1800 made Ireland a part of Britain and therefore Ireland's independence was further away. It also gave all the power to the unionists. This caused nationalists to feel isolated and searching for ways to get back their country. It appears that the Irish have lost everything. Then just when things couldn't get any worse. In 1845 the Famine came to Ireland. The Irish were so poor and had little land they relied entirely on potatoes to survive. As a result more than 1/2 million people died as a result of starvation and disease and a further 1/2 million emigrated. ...read more.

There fore this meant the Irish also formed an army and this made conflict much more likely and it also helps to explain 'THE EASTER RISING'. The balance of power put nationalists in a very strong position when they joined with the liberal government, they were promised home rule. The unionists however as I said before were furious and formed the UVF to fight against home rule. This made a compromise almost impossible. When the firs world war broke out many unionists and nationalists forgot about home rule and volunteered to fight in the British army. This lead to a split in a nationalist camp! A group of Irish nationalists broke away and decided rather than fight with Britain they should use this opportunity and attack the British when they were not expecting it in Ireland. They were called the IRB. They had no enemy except England. "Break the connection with England, the never falling source of all our evils". (IRB...1916) ?? ?? ?? ?? Michael McErlain Y12 AB ...read more.