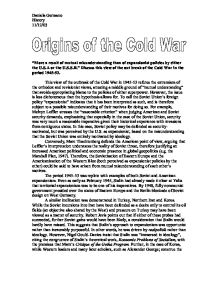 &quot;More a result of mutual misunderstanding than of expansionist policies by either the U.S.A or the U.S.S.R.&quot; Discuss this view of the out break of the Cold War in the period 1945-53.

"More a result of mutual misunderstanding than of expansionist policies by either the U.S.A or the U.S.S.R." Discuss this view of the out break of the Cold War in the period 1945-53. This view of the outbreak of the Cold War in 1945-53 refutes the extremism of the orthodox and revisionist views, attesting a middle ground of "mutual understanding" that avoids appropriating blame to the policies of either superpower. However, the issue is less dichotomous than the hypothesis allows for. To call the Soviet Union's foreign policy "expansionist" indicates that it has been interpreted as such, and is therefore subject to a possible misunderstanding of their motives for doing so. For example, Melvyn Leffler stresses the "reasonable criterion" when judging American and Soviet security demands, emphasizing that especially in the case of the Soviet Union, security was very much a reasonable imperative given their historical experience with invasions from contiguous states. ...read more.

By 1948, fully communist government presided over the states of Eastern Europe and the Berlin blockade of Soviet design on West Germany. A similar inclination was demonstrated in Turkey, Northern Iran and Korea. While the Soviet incursions into Iran have been defended as a desire only to control its oil fields (an objective also shared by the West) and pressure on Turkey may have been viewed as a matter of security. Robert Jevis points out that if either of these probes had succeeded, further Soviet gains would have been likely, a consideration that Stalin would hardly have missed. This suggests that Stalin's approach to expansionism was opportunist rather than inexorably purposeful. In other words, he was driven by realpolitik rather than ideology. However, Nigel Gould-Davies insist that Stalin was "immersed in ideology", citing the congruence of Stalin's theoretical work, Economic Problems of Socialism, with the premises that Marx's Critique of the Gotha Program. ...read more.

Stalin understandably perceived the Marshall Plan as a "blatant American device" for gaining control of Western and (if not worse) Eastern Europe. Concerning Korea, Anotaly Dobrynin asserts that by the 1950s, Stalin "saw U.S. plans and actions as preparations for an all out war of unprovoked aggression against the Soviet Union." The rollback policy did little to assuage this fear, and even thought its pursuit by General MacArthur proved to be an unfortunate divergence from the Truman Administration policy, the Soviets had already been convinced of American expansionism. It can be seen again, therefore, that mutual misunderstanding on both sides led to perceptions of the other's policies as being expansionist, which in turn, sowed the distrust and reason from retaliatory action that set the Cold War in motion. In conclusion, barring other factors, the outbreak of the Cold War in 1945-53 was more a result of mutual misunderstanding than of expansionist policies by either superpower. Daniela Germano History 11/12/03 ...read more.