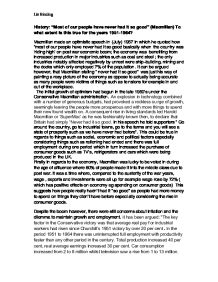 Most of our people have never had it so good (Macmillan) To what extent is this true for the years 1951-1964?

History: “Most of our people have never had it so good” (Macmillan) To what extent is this true for the years 1951-1964?

Macmillan made an optimistic speech in (July) 1957 in which he quoted how “most of our people have never had it so good basically when the country was ‘riding high’ on post war economic boom; the economy was benefiting from increased production in major industries such as coal and steel; the only industries notably affected negatively by unrest were ship-building, mining and the docks which only employed 7% of the population. It can be argued however, that Macmillan stating “ never had it so good” was just his way of painting a rosy picture of the economy as oppose to actually being accurate as many people were victims of things such as tensions for example in and out of the workplace.

The initial growth of optimism had begun in the late 1950’s under the Conservative Macmillan administration. An explosion in technology combined with a number of generous budgets, had provoked a reckless surge of growth, seemingly leaving the people more prosperous and with more things to spend their new found wealth on. A consequent rise in living standards led Harold Macmillan or ‘SuperMac’ as he was fashionably known then, to declare that Britain had simply “Never had it so good. In his speech he told supporters “ Go around the country, go to industrial towns, go to the farms and you will see a state of prosperity such as we have never had before”. This could be true in regards to things such as social, economic and political factors especially considering things such as rationing had ended and there was full employment during one period which in turn increased the purchase of consumer goods such as TV’s, refrigerators and cars which were being produced in the UK.

Firstly in regards to the economy, Macmillan was lucky to be voted in during the age of affluence where 60% of people made it into the middle class due to post war. It was a time where, compared to the austerity of the war years, wage , exports and investments were all up for example wage rose by 72% ( which has positive effects on economy eg spending on consumer goods) This suggests how people really hadn’t had it “so good” as people had more money to spend on things they didn’t have before especially considering the rise in consumer goods.

Despite the boom however, there were still concerns about inflation and the dilemma to maintain growth and employment. it has been argued: "The key factor in the Conservative victory was that average real pay for industrial workers had risen since Churchill’s 1951 victory by over 20 per cent. In the period 1951 to 1964 there was uninterrupted full employment with productivity faster than any other period in the century. Total production increased 40 per cent, real average earnings increased 30 per cent. Car consumption increased from 2 to 8 million whilst television saw a rise from 1 to 13 million. MacMillan consistently hid the balance of payments problems in stop-go economic short termism and sterling devaluations. The economic boom had basically led to the economy becoming ‘overheated and needed cooling’, a result of the rise of affluence that required Conservatives to reduce government spending, increase bank rates to help lower demand with the aid of strict taxation.  They had to deal with this carefully as it was the boom that had significantly assisted their stay in power and provided these increases in living standards that contributes to whether people actually “never had it so good”. So, As a result considering the balance of payments problems in the stop go economics, the 2.6% GDP growth rate was less than any other developed country in the western world except for Ireland, with Britain experiencing further Balance of Payments crises in 1961 and 1964. This suggests that although Britons may have ‘Never had it so Good’, Europeans were ‘having it better’

People did still seemingly have it good though as the people still voted in the Tories two years after his speech in 1956 where they won yet another election. Something I consider a tactic is the fact that the conservatives implemented tax cuts before the elections which obviously contributed towards them winning the election but it also benefited the people thus how they have never “ had it so good”

The government was also further more rocked by failure to join ECC.  Macmillan decided to pursue an application for membership of the European Economic Community which split the party and was subsequently vetoed by French President Charles de Gaulle. In 1962, government unpopularity spurred Macmillan into dismissing one-third of the Cabinet, "the Night of the Long Knives", an act that upset many of his own supporters. The following year, his handling of the Profumo affair — when his War Minister resigned after admitting lying to the House about his affair with a prostitute — left him looking out of touch with events. He looked old, and old-fashioned, in comparison with the new Labour leader so things appeared unstable and arguable not the best in regards to never having it so good.

A number of things initially impacted the extent of the quote for example in 1963 the profumo affair shattered the governments reputation and Macmillan’s “never had it so good” illusion by the secretary of state’s affair with Russian spy being exposed. Scandals such as this and even the Suez crisis (which seemingly woke Britain up from the austerity) during Eden’s time in office damaged reputation which questions really how good was it as it provokes instability as things such as foreign affair and international relationships appears strained despite the advantage that the Conservatives recovered quickly from problems such as the Suez crisis. Critics even mock the notion that Britain had ‘Never had it so Good’ in their condemnation of Britain’s diminishing status as a world power. The Suez crisis mentioned left Britain with an embarrassment in terms of government respectability. What Suez showed with brutal frankness was that Britain had lost its place as a great world power able to play by the rules, and ‘simply looked absurd when trying to cheat’. Rather than maintaining Britain’s world status by shifting focus from Imperialist objectives to Commonwealth, Suez showed how British politicians, in misrepresenting Nasser as ‘the Hitler of the Nile’, could embarrass itself on a global stage. Marr asserts, ‘Government by click became government by conspiracy’. Marr is highlighting the public rejection of the Etonian-Oxbridge bred ‘Establishment’ government riddled with corruption and complacency. Economically, it highlighted over reliance on US sterling support, which when removed led to a Sterling Crisis. Furthermore, Suez can be seen as a watershed moment in Britain’s foreign policy. Britain no longer had the military power or economic resources to engage in Empire maintenance

Moreover, the Conservative economic policies of this period were accused of being too concerned with macro policies that supported rapid growth but failed to develop policies that directly improved economic efficiency and looked to developing the economy in the long term, with adverse effects on international competitiveness, leading to problems, so notable it diminished the concept that Britain had “ never had it so good”. Apparently “It was a government of Tory wets for whom social harmony was a higher priority than economic efficiency.” (Addison. 1992)

MacMillan also rhetorically asked in the same speech, ‘Is it too good to be true…too good to last?’ During this time period there was still the consensus from Atlee’s government in regards to the welfare state inherited of Beveridge’s welfare and Keynes’ economics which became MacMillan’s story of British affluent success.  This is significant as it shows how the people of Britain were enabled such benefits which maintained improvements in health and overall social/living conditions, people were able to make use of the welfare state which shows how things were supposedly good, like they have never had before.

The social aspects such as living conditions we considerably improved. The actual proportion of Britain's population saying they are "very happy" was 52% in 1957. The streets were however covered in soot and polluted (possibly due to the industrial success) which wasn’t good for people health which however was weighed up by the welfare state.

Life in the period was the emergence of an individualistic consumer society based on youth culture. From MacMillan’s point of view, he argued that the 1960’s represented a classless society in which ‘we won it’. American sociologist Edward Shils agreed with MacMillan saying how “Scarcely anyone in Britain seems any longer to feel there is anything fundamentally wrong. Never has an intellectual class found its society and its culture so much to its satisfaction” which was seemingly apparent even in general things such as strikes for example in the USA 1,185 working days were lost due to strike actions whereas only 272 were lost in Britain ( during the same years of 1951-62) which showed how generally standards had improved.

There was an initial rise in consumer goods as previously mentioned however there were more consumer goods being made than actually being bought in Britain, there was a share of world trade that had decline in this pose war era. This was due to other countries being starved financially from the war and couldn’t afford to export goods from other countries. Ironically though, those ‘starved’ countered achieved better capital GNP than Britain because they had to literally start their economies up again, as did Britain. It ended up with Britain losing money abroad as they had a lot of investment abroad and countries couldn’t afford their products due to the failing economies.

Overall, I think it was just fragile prosperity, that yes things had significantly improved and some people perhaps really hadn’t “ had it so good” before, but there were still many negative factors such as those in which Macmillan even said in speech in which he reminded his supporters of the “ rationing, shortages, inflation, and one crisis after another in our international trade" under a Labour government which goes to suggest that perhaps the people “ never” had had it so good in comparison to previous times such as Attlee’s government