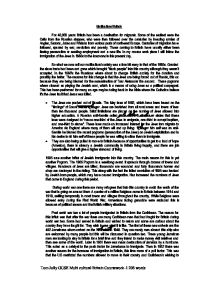 Multicultural Britain - For 40,000 years Britain has been a destination for migrants.

Multicultural Britain For 40,000 years Britain has been a destination for migrants. Some of the earliest were the Celts from the Russian steppes, who were then followed over the centuries by invading armies of Angles, Saxons, Jutes and Frisians from various parts of northwest Europe. Centuries of migration have followed, spurred by war, revolution and poverty. Those coming to Britain have usually either been fleeing persecution or seeking employment and a new life. In my course work piece I will follow the immigration of the Jews in 1880s to the kosovons in this present day. So what we now call our multicultural society was a fare bit away to that of the 1880s. Granted the slave trade had been and gone which brought "black people" into this country although they weren't accepted. In the 1880's the Russians where about to change British society for the duration and possibly the better. The reasons for this change is that the Jews are being forced out of Russia, this as because they are being blamed for the assassination of Tsar Alexander the second. These pogroms where classed as playing the Jewish card, which is a means of using Jews as a political scapegoat. ...read more.

During world war one there are many refugees that into this country to avoid the wrath of the war that is going on around them A quarter of a million Belgians came to Britain between 1914 and 1919, settling temporarily in most towns and villages throughout the country. While Belgians were allowed entry during the First World War, Armenians facing genocide were excluded this is because of political reason and the British military situations. Post world war two a lot of people immigrated to Britain from the Caribbean. The reason for this influx was that after the war there are many Caribbean men that had fought for Britain during world war two. Some had served in Britain and wished to return and some are curious about the country they have fought for. They wish to see what it is like. The first of these new arrivals are the 492 Jamaicans whom arrived on the Windrush in 1948. They are manly men aboard this ship who are welcomed by many people but this will be discussed in question two. These young Jamaican men are looking to stay in Britain for a brief time and they intend to make money visit relatives and then see some of the world. ...read more.

Then later on 5,000 Czechs and Slovaks came after the defeat of the 1968 'Prague spring'. This is when the Russian communists have returned communist power to a Czechs public state. The most recent and widely publicized incident of immigration to this country must be the Sangatte Refugee camp. This is when about 1,200 immigrants from the Sangatte refugee camp have arrived in Britain, under a deal to close the centre. The centre had caused a lot of problems recently where the refugees refused asylum in France have inured the travel across the channel (or more accurately under). As they risked there lives to get into Britain. The Sangatte deal has included four-year work visas allowing them to find employment legally. The story of immigration into Britain is a rich history. But Britain is not alone in have people immigrate to its country most of the European colonizing countries have the same issues to deal with. Most if not all the immigrants I have looked at have moved either because of persecution, revolution and war. There of course are those that have moved to seek a better life but isn't that much the same as fleeing a bad life? Tom Jolly GCSE Multi cultural Britain Coursework-1 206 words ...read more.