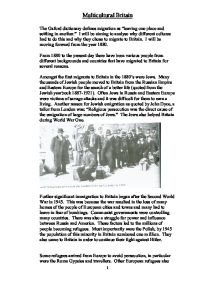 Multicultural Britain The Oxford dictionary defines migration as "leaving one place and settling in another." I will be aiming to analyse why different cultures had to do this and why they chose to migrate to Britain. I will be moving forward from the year 1880. From 1880 to the present day there have been various people from different backgrounds and countries that have migrated to Britain for several reasons. Amongst the first migrants to Britain in the 1880's were Jews. Many thousands of Jewish people moved to Britain from the Russian Empire and Eastern Europe for the search of a better life (quoted from the Jewish yearbook 1887-1921). Often Jews in Russia and Eastern Europe were victims of savage attacks and it was difficult for them to earn a living. Another reason for Jewish emigration as quoted by John Dyce, a tailor from London was: "Religious persecution was the direct cause of the emigration of large numbers of Jews." The Jews also helped Britain during World War One. ...read more.

Twice Britain had been bombed. Her buildings, industries and roads were destroyed. These all needed re-building so Britain needed workers to help Britain become Great again. These workers were European refugees, but most of the workers came from the Commonwealth, which was a group of countries that belonged to the British Empire. The Nationality Act of 1948 made it easy for citizens of the Commonwealth to settle in Britain. The Irish migrated to Britain because of poverty in Ireland and the need for work; by 1949 there were a million Irish in Britain. The people of the British colonies in the Caribbean such as Jamaica, Barbados and Trinidad were needed as workers and they were willing to come because of unemployment and poverty back home. Indian's and Pakistani's also came to aid Britain and some of them had nowhere to live after the partition. The Hungarian's also arrived in the 1950's. They were fleeing from persecution from communist governments. The Kenyan Asians migrated to Britain because of Kenya's policy of Africanisation. ...read more.

In the year 2000 there was over half a million Kurdish refugees in Britain. Iranian's and Iraqi's also came as refugees because of abuses of human rights. Many people from China and Tibet also settled because of no freedom of speech and no freedom of religion. There was a war between the Tamil who want their independence and the Sri Lankan government and army so many have come to Britain because of this. There have also been abuses of human rights in Sudan so the Sudanese have migrated to Britain as well. In conclusion there have been many reasons why people chose to migrate to Britain between 1880 to the present day. Some came to Britain for its political stability and its fairness and liberal laws, others for freedom of worship or for economic reasons. Britain's respect for human rights is also a factor. Asylum seekers have settled as well as those seeking an education or job. Other migrants came to Britain to escape poverty and extreme hardship and unemployment. I think the most important reason that migrants chose to settle in Britain is the view of Britain's multicultural law, that Britain has a sense of fair play, freedom of speech and justice for all. 1 ...read more.