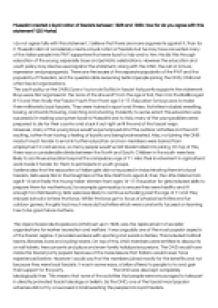 Mussolini created a loyal nation of fascists between 1926 and 1939. How far do you agree with this statement? (20 Marks)

Transfer-Encoding: chunked ﻿Mussolini created a loyal nation of fascists between 1926 and 1939. How far do you agree with this statement? (20 Marks) I do not agree fully with this statement, I believe that there are more arguments against it, than for it. Mussolini did not completely create a loyal nation of fascists but he may have converted many of the Italian people into PNF supporters that were loyal to Italy and to him. He did this through education of the young, especially boys and patriotic celebrations. However the education and youth policy may also be used against the statement, along with the OND, the cult of il Duce, repression and propaganda. There are the issues of the separate popularity of the PNF and the popularity of Mussolini, and the questionable reasoning behind people joining the OND, ONB and other fascist organisations. The youth policy or the ONB (Opera Nazionale Balilla) in fascist Italy partly supports the statement. Boys were first organised in the ?sons of the she wolf? from the age of 6-8, then into the Balilla aged 8-14 and then finally the Fascist Youth Front from age 14-17. ...read more.

The Opera Nazionale Dopolavoro (OND) set up in 1925, was the replacement of socialist organisations for worker recreation and welfare. It was arguably one of the most popular aspects of the fascist regime. It provided workers with sporting and social activities. This included football teams, libraries, bars and cycling teams. On top of this, OND members were entitled to discounts on rail tickets, free concerts and plays and even family holidays/excursions. The OND would have made the fascist party popular because of the mass leisure that Italians would never have experienced before. However I would say that the members joined mostly for the benefits and not because they were loyal fascists. It was in some ways, a bribe offered to people to try and gain their support for the party. The OND was also kept completely ideologically free. This means that none of the activities that people were encouraged to take part in directly promoted fascist ideology or beliefs. So the OND, one of the fascist most popular schemes did not try or succeed in brainwashing the people into loyal Fascists. ...read more.

On the other hand, the Ministry of Popular Culture was never very organised and it was difficult to exploit modern mediums. Also, there was a lack of media in the south so it was hard to find a consensus for the support of fascism and so it was questionable if propaganda actually transformed Italian attitudes. Mussolini?s leadership was described by historians as the cult of il Duce. In the media, Mussolini was portrayed as a great leader with immense ability. There were over 30,000,000 posters of him in 2500 different poses, including many shirtless photos. This ensured that Mussolini appealed to everyone, he was a powerful leader, a modern sportsman and attractive to women. The cult of il Duce, in my opinion, only gained support for Mussolini and not PNF policies meaning that, unlike ancient Roman leaders, Mussolini would not leave a legacy behind. In conclusion, Mussolini evidently did not create a complete nation of loyal fascists between the years of 1926 and 1939. We know this from the youth policy, the lack of ideology in the OND, propaganda and the cult of il duce. I believe that the majority of support was for Mussolini himself, rather than the fascist regime. ...read more.