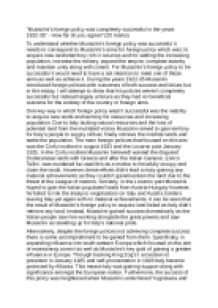 &quot;Mussolini's foreign policy was completely successful in the years 1922-35&quot; - How far do you agree?

Ã¯Â»Â¿"Mussolini's foreign policy was completely successful in the years 1922-35" - How far do you agree? (20 marks) To understand whether Mussoliniâ€™s foreign policy was successful it needs to correspond to Mussoliniâ€™s aims for foreign policy which was: to acquire new lands/territory rich in sources and for settling the increasing population, increase the military, expand the empire, complete autarky and maintain unity along with control. For Mussoliniâ€™s foreign policy to be successful it would need to have a set intention to meet one of these aims as well as achieve it. During the years 1922-35 Mussolini introduced foreign policies with outcomes of both success and failure but in this essay, I will attempt to show that his policies werenâ€™t completely successful but instead largely a failure as they had no beneficial outcome for the entirety of the country or foreign aims. One key way in which foreign policy wasnâ€™t successful was the inability to acquire new lands and territory for resources and increasing population. Due to Italy lacking natural resources and the loss of potential land from the mutilated victory Mussolini aimed to gain territory for Italyâ€™s people to supply oil/fuel, finally retrieve the irrednte lands and settle the population. ...read more.

Specifically, in expanding influence into south eastern Europe which focused on the aim of maintaining control as well as Mussoliniâ€™s key goal of gaining a greater influence in Europe. Through backing King Zogâ€™s I accession to president in January 1925 and self-proclamation in 1928 Italy became protected by Albania. This meant Italy was gaining support along with significance amongst the European nation. Furthermore, the success of this policy was heightened when Mussolini undermined Yugoslavia and supported nationalist and Croatian movements that aimed to sperate themselves from the Yugoslav state and later assassinated the Yugoslav king Alexander with financing from the Italian fascists. Because of this policy, through interference in the Yugoslav state, it extended Italyâ€™s influence in southern eastern Europe and aided the foreign policies success. However, like the rest of the foreign policy it wasnâ€™t completely successful as Italy didnâ€™t gain any influence with great powers but with the lower positioned nations; also, theoretically it was beneficial but practically it wasnâ€™t as in no way did Italy expand their empire or acquire new land but instead gave funds to Croatian terrorists with no gain in material. ...read more.

Overall, it is clear that Mussoliniâ€™s foreign policy failed to be completely successful between 1922-35. It is accurate that many of his polices were successful for Mussolini domestically and achieved a certain level of success. The expansion in south eastern Europe affairs was successful but wasnâ€™t aimed at expanding the empire or acquiring new lands or territories which it had the potential to achieve. Given Mussoliniâ€™s strong use of policies as propaganda it is hard to judge whether Mussoliniâ€™s policies were in fact intended to be a success to benefit himself rather than Italy. However, when he tried to meet his foreign aims through his policies it didnâ€™t bring a material gain for Italy therefore not a large success for Italy. Despite being unsuccessful for Italy they were successful for Mussolini as it increased his popularity within Italy and acknowledged him as a dynamic ruler. To conclude Mussoliniâ€™s foreign policy wasnâ€™t completely successful as it lacked any beneficial impact on Italy but was partly successful in helping Mussolini secure his dictatorship by increasing his popularity and cementing his power in Italy. ...read more.