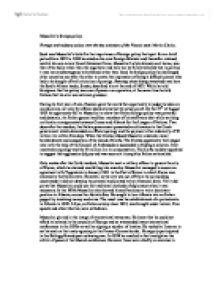 Mussolini's foreign policy. Foreign and military policy were the key activities of the Fascist state. Martin Clarke. Such was Mussolini's belief in the importance of foreign policy that apart form a brief period from 1922 to 1936 he acted as his own Foreign Minister and thereafter retained control his son-in-law Count Galeazzo Ciano. Mussolini's style abroad, as at home, was that of the bully rather than the negotiator and here too he firmly believed that in politics it was more advantageous to be feared rather than liked. In foreign policy he challenged other countries one after the other to create the impression of being a difficult person who had to be bought off with victories of prestige. Running about biting everybody was how the South African leader, Smuts, described him at the end of 1923. While he told foreigners that his policy was one of peace a co-operation, at the same time he told Italians that his aim was national grandeur. During its first year of rule, Fascism gave the world the opportunity to judge its ideas on world policy, not only by official declarations but by actual proof. ...read more.

He rushed to Locarno to set his seal on the treaty agreeing to the Franco-German border. He eagerly participated in the Kellogg-Briand pact outlawing war. In 1938 he revelled in the limelight as the arbiter of peace at the Munich conference. However these were chiefly an exercise in public relations as Mussolini was prepared to sign a treaty just for the effect it would have on the public and without bothering too much on the details of what it contained. Treaties were just pieces of paper with no binding force if circumstances changed. Meanwhile, the rise of Hitler and the Nazis worried Mussolini and in 1934 he made clear his opposition to a union between Germany and Austria Anschluss In January 1935 a formal treaty was signed with France. Then at Stresa in April, Italy, France and Britain jointly condemned Hitler's re-armament plans and committed themselves to close and cordial collaboration to maintain the status quo in Europe. Mussolini once declared My objective is simple I want to make Italy great, respected and feared. Believing that France and Britain would curtail Hitler's aggressiveness, Mussolini turned his attention to North Africa to Abyssinia. ...read more.

Accordingly, in April he seized Albania, which was an Italian protectorate. In May 1939 Italy signed the Pact of Steel with Germany, which committed Italy to military undertakings. When Germany invaded Poland and World War II was declared Italians were thunderstruck, as they had not expected war until 1943. Mussolini that Italy was not ready for war unless huge quantities of raw materials and armaments wee forthcoming. Hitler was thus forced to go to war without the aid of his Italian ally. As the Germans swept all before them Mussolini became convinced that unless he acted quickly the war would be over and Italy would have made no gains. Thus on the 10th of June 1940 Italy joined the war in the side of Germany against what he called 'the reactionary democracies of the West. This was a decision that ultimately led to his downfall and the collapse of the Fascist state. Any examination of Mussolini's foreign policy show that his was a complex and contradictory personality, all too willing to believe in the myth of his own infallibility. He had little capacity for long-range planning and was more concerned with the winning of prestige for himself and his Fascist state. ...read more.

This is a knowledgeable and well written account that provides lots of information but lacks analytical points to directly address the question. The chronological structure does not make it easy for the author to evaluate the importance of events. 3 out of 5 stars.