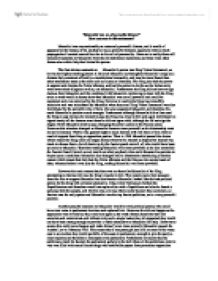 &quot;Mussolini was an all powerful dictator&quot; - How accurate is this statement?

"Mussolini was an all powerful dictator" How accurate is this statement? Mussolini was unquestionably an extremely powerful dictator, and it would of appeared to the Italians of his era that he was a powerful dictator, especially with so much propaganda all centred around him due to his cult of personality. However in reality there still remained restraints on Mussolini from the old traditional institutions and there were other factors also within Italy that limited his power. The first obvious restraint on Mussolini's power was King Victor Emmanuel, as he was the highest ranking person in Italy not Mussolini as throughout Mussolini's reign as a dictator Italy remained officially a constitutional monarchy, and was far more liberal than other totalitarian states at the time such as Russia or Germany. The King also had the power to appoint and dismiss the Prime Minister, and had the power to do this as the Italian army were swore their allegiance to him, not Mussolini. Furthermore the King did not have to sign decrees from Mussolini and this combined with Mussolini continuing to meet with the King twice a week would in theory show that Mussolini was not all powerful and could be restrained and even removed by the King. However in reality the King was incredibly indecisive and was intimidated by Mussolini when they met. King Victor Emmanuel was also intimidated by the powerful elite of Italy, who also supported Mussolini and therefore this made Mussolini's position much stronger. Furthermore although Mussolini did at first need the King to sign decrees he wanted to pass the King was loyal to him and again intimidated so signed nearly all the decrees even those he did not agree with, although he did not sign the degree which Mussolini tried to pass changing the army's salute to the Fascist salute. However this situation changed as Mussolini became more powerful as his dictatorship went on and in January 1926 he was granted right to issue decrees with full force of law, with no need of support from king or opposition parties. ...read more.

He also controlled education and the indoctrination of the Italian youth, encouraging his cult of personality and new text books were produced to glorify him, while school teachers were also forced to support Mussolini. This gave Mussolini even more power as it was indoctrinating children and neutralising any threat from the next generation of Italians. Despite all this power Mussolini still faced his most powerful opposition which was the Pope and Church institution. Italy was a very religious country and the church had the most power and influence over the people. Mussolini realised this immediately and decided he would have to compromise with the church to keep them on his side. Mussolini first tried to gain credibility with the Roman Catholic Church by having his children baptised in 1923 and then in 1926, he had a religious marriage ceremony, as their first marriage had been a civil ceremony. Then Mussolini decided to buy support from the Church by giving out millions in compensation in 1929 and then 09 acres in Rome to create a new papal state known as the Vatican. The pope was allowed a small army, police force, post office and rail station and a country retreat. Furthermore Mussolini banned swearing in public and made religion a compulsory subject in schools. After this agreement Mussolini was sure that the Church would support his regime and stay out of politics, again making Mussolini very powerful as he managed to subdue his only opposition that he could not destroy, while the Pope encouraged support for his regime. The Pope also supported the regime because he felt the church was safer under fascism than the ungodly communists and socialists, which made fascism even stronger as it was seen as the best option by the Pope. Despite all this power Mussolini had gained over so many areas of Italy he was not an intellectual and could not rule alone. ...read more.

This is a clear example of Mussolini's weakness. An all powerful dictator would not need to confer or seek anyone else's approval. Mussolini could not rule alone as he wasn't an intellectual, so relied heavily on civil service to implement his policies, Mussolini made thousands of policies and he was extremely disorganised, meanwhile they could use their own spin on policy and influence it, and the system was so corrupt that they could get away with it very easily He didn't personally administer ay of his ministries so did not know what was going on in them. In 1927 only 15% of civil service were fascists, was compulsory to join Fascist party in 1935 but that did not mean they all then practised fascism The fact that he held so many top ministerial positions implies that he could not trust people, and therefore was not all powerful if he thought people beneath him could betray him Although the Fascist Grand Council appeared to be less important and significantly weak it still managed to sack him as leader of the party in 1943. Mussolini still relied on traditional institutions such as church, it was a very religious country and the Church had a lot of influence over the people The Elite still had influence and power Judiciary could of helped individuals but didn't, however they could of which shows he was not all powerful The Mafia had strong influence in the south; it almost ruled it. Even if Mussolini did a lot to destroy this organisation it still existed under cover. The Mafia did not accompany Mussolini and the fascist party's power but it replaced it. Indeed the south of Italy remained mainly in rural area independent of Fascist influence. This independence was nevertheless unimportant because the southern part of Italy was poor, lightly populated and not industrialised. Mussolini neglected the south in his efforts to dynamise the industry and economy of the country. http://www.historylearningsite.co.uk/mussolini_dictatorship.htm ...read more.