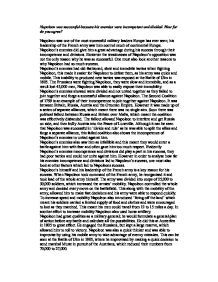 Napoleon was successful because his enemies were incompetent and divided. How far do you agree?

Napoleon was successful because his enemies were incompetent and divided. How far do you agree? Napoleon was one of the most successful military leaders Europe has ever seen; his leadership of the French army saw him control much of continental Europe. Napoleon's enemies did give him a great advantage during his success through their incompetence and divisions. However the weaknesses of Napoleon's opposition was not the only reason why he was so successful. One must also look at other reasons to why Napoleon had so much success. Napoleon's enemies had old-fashioned, slow and immobile tactics when fighting Napoleon, this made it easier for Napoleon to defeat them, as his army was quick and mobile. This inability to produced new tactics was exposed at the Battle of Ulm in 1805. The Prussians were fighting Napoleon, they were slow and immobile, and as a result lost 45,000 men, Napoleon was able to easily expose their immobility. Napoleon's enemies showed were divided and not united together as they failed to join together and forge a successful alliance against Napoleon. The Second Coalition of 1799 is an example of their incompetence to join together against Napoleon. ...read more.

This meant his men could travel from 12 to 15 miles a day. In another effort to increase mobility Napoleon also used horse artillery. Napoleon had great qualities as a military general; he would formulate a general plan of action before any battle and calculate all the possibilities. He did this at Austerlitz in 1805 to great effect. He engaged the Russians, but kept a large reserve, which allowed him to roll to victory. Napoleon was also a quick thinker and was able to improvise by using his mobile army to take advantage of enemy mistakes. This can be seen at the Battle of Ulm in 1805, where he improvised by making a quick decision to send marshal Murat in pursuit of the Austrians, which reduced their numbers from 70,000 to 27,000. Napoleon possessed great charisma. Wellington said of him 'his presence in the battlefield is worth an extra 40,000 men'. He would fight alongside his men, which inspired his men and gained him respect. He did this at the Battle of Austerlitz in 1805, when times got hard for his soldiers. ...read more.

By 1805 it consisted of around 600,000 men. This was an obvious a great advantage to Napoleon, it enabled him to change the nature of warfare to 'levee on masse'. The size of the army allowed him to surround enemies as he did at the twin battle of Jena-Auerstadt where by surrounding the Prussians, made them face on the wrong way when battle began, as a result they lost 45,000 men. Napoleon was also able to take huge losses himself, as on average he took on 73,000 new conscripts. Napoleon also inherited the experienced soldiers that had fought in the 'Grande Armee' during the French revolution; these men were of great value. So evidently Napoleon was assisted in his success, as he inherited a huge army, which gave him the edge against the smaller, weaker armies of his enemies. So although Napoleon was assisted by the incompetent and divided nature of his enemies, other factors also had a great contribution in his success, particularly his military skills and leadership. Without possessing great skills he would have not been as successful. It was his skills, which allowed him to take advantage of the weakness of his enemies, and the army he inherited and as a result have so much military success. ...read more.