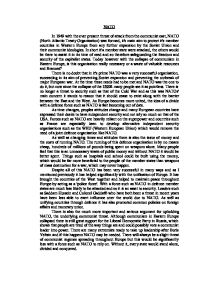 Nato.There is no doubt that in it's prime NATO was a very successful organisation, succeeding in its aim of preventing Soviet expansion and preventing the outbreak of major European war.

NATO In 1949 with the ever present threat of attack from the communist east, NATO (North Atlantic Treaty Organisation) was formed, it's main aim to protect it's member countries in Western Europe from any further expansion by the Soviet Union and their communist ideologies. In short if a member state were attacked, the others would be there to assist it in its time of need and so therefore safeguarding the freedom and security of the capitalist states. Today however with the collapse of communism in Eastern Europe, is this organisation really necessary or a waste of valuable resources and finances? There is no doubt that in it's prime NATO was a very successful organisation, succeeding in its aim of preventing Soviet expansion and preventing the outbreak of major European war. ...read more.

which would remove the need of a joint defence organisation like NATO. As well as changing times and attitudes there is also the issue of money and the costs of running NATO. The running of this defence organisation is by no means cheap, hundreds of millions of pounds being spent on weapons alone. Many people feel that this is an unnecessary waste of public money and without NATO it would be better spent. Things such as hospitals and school could be built using the money, which would be far more beneficial to the people of the member states than weapons of mass destruction for a war, which may never happen. Despite all of this NATO has been very successful in many ways and as I mentioned previously it has helped significantly with the unification of Europe. ...read more.

There are many extremists ready to take up leadership after Boris Yeltsin and if this happens NATO may be needed. There will always be a slight threat of communist regimes spreading throughout Europe but this would be significantly less with a force such as NATO to rely on. Without it, every state would stand alone, divided and conquered. In conclusion I feel that although costs are too high and the money required could be better spent, NATO is a worthwhile organisation and should continue to exist today despite the lack of communist threat. I do believe however that it has to be modernised to deal with the issues of the 21st century and not that of when it was formed but this already seems to be taking place. If anything it contributes greatly to international peace keeping and helps unify its member states, which I feel can only be a good thing. ...read more.