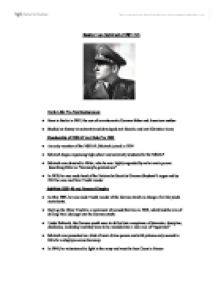 Baldur von Schirach (1907-74) Early Life/ Pre-n**i background * Born in Berlin in 1907, the son of an aristocratic German father and American mother * Studied art history at university and developed anti-Semitic and anti-Christian views Membership of NSDAP and Role Pre 1933 * An early member of the NSDAP, Schirach joined in 1924 * Schirach began organising high school and university students for the NSDAP * Schirach was devoted to Hitler, who he was highly regarded by as he wrote poems describing Hitler as "Germany's greatest son" * In 1929, he was made head of the Nationalist Socialist German Students' League and by 1931 he was mad n**i Youth Leader Job/Role 1939-45 and Personal Empire * In May 1993, he was made Youth Leader of the German Reich in charge of all the youth movements. * Built up the Hitler Youth to a movement of around 8million in 1939, which had the aim of drilling n**i ideology into the German youth. * Under Schirach, the German youth were to drilled into acceptance of character, discipline, obedience, leadership and they were to be moulded into a new race of "supermen" * Schirach was presented as a kind of semi-divine person and ...read more.

In addition to the successful economic recovery Hitler's successful foreign policy also maintained popular support. The tearing up of the hated Treaty of Versailles and the reoccupation of the Rhineland were greeted with enthusiastic support from most Germans, and as source 6 claims, this 'internal rebuilding of the country and the national triumphs all attributed to (Hitler's) genius'. (5) Many people were never to change their view about Hitler and indeed the success of Goebbel's Hitler Myth reinforced the image of Hitler as the saviour of Germany. (6) Even as Hitler . began to turn inwards and even as the war came onto the horizon people would be 'clamouring for him'. (Source 5) However source 5 also suggests that increasingly morale was in decline as war approached and the regime found it necessary to 'organise cheering crowds' this suggests that the success of the regime was declining as Hitler's territorial ambitions brought war closer and with an increase in restriction on people and fear of what war would bring. However there was no sudden backlash against Hitler though there were increased grumblings and criticisms about other leading Nazis. ...read more.

However, KD Bracher has pointed out that Hitler was always master in the Third Reich, suggesting that his regime was strong, stable and successful and that he deliberately ruled by 'divide and rule'. (12) It is clear that, to a large extent, the Hitler regime was strong, stable and successful in the period 1933 to 1939. Certainly on the surface it maintained this image. The absence of any real challenge to Hitler or his regime points to strength and success and many in Germany were happy to accept the 'booming economy' and the restoration of 'law and order' as 'few were concerned if civil liberties had been destroyed'. Additionally, whilst there certainly existed grumblings, no real criticisms or challenges came to the fore until the outbreak of war. It is therefore possible to accept the existence of some opposition without denying the essential stability of the regime, based on its success as well as its methods of repression. What was perhaps more significant was the hint of tension as war approached, and the nature of Hitler's control, which promoted internal rivalry and extremism, threatening stability, but not in the immediate situation. Only with the lack of military success as the war progressed did the strength and stability of the regime begin to crack. (13) ...read more.