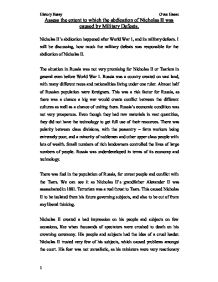 Nicholas II's abdication happened after World War 1, and its military defeats. I will be discussing, how much the military defeats was responsible for the abdication of Nicholas II. The situation in Russia was not very promising for Nicholas II or Tsarism in general even before World War 1. Russia was a country created on vast land, with many different races and nationalities living under one ruler. Almost half of Russian population were foreigners. This was a risk factor for Russia, as there was a chance a big war would create conflict between the different cultures as well as a chance of uniting them. Russia's economic condition was not very prosperous. Even though they had raw materials in vast quantities, they did not have the technology to get full use of their resources. ...read more.

His people and subjects had the idea of a cruel leader. Nicholas II trusted very few of his subjects, which caused problems amongst the court. His fear was not unrealistic, as his ministers were very reactionary and created an unstable political situation for him. As a dictator, he had t take responsibility for all of Russia's Faults. These facts establish there were problems for Nicholas II in Russia prior to World War 1. There were short term and long term factors to anger the Russian citizens after the military defeats, and the anger were channelled towards Nicholas II. There were economic factors, as there was hyperinflation, causing unrest amongst the people. Over 17,000 million roubles were spent on war effort, which weakened the economy. ...read more.

This made the situation for the people even worse. The population was angry at the Tsar, as it was him who put them in charge. They were also quite angry, that a German Tsarina was put in charge, when they were enemies to Germans. The Tsar was also blamed personally for the military defeats, as he was in the frontline of war himself directing it. There were many factors, which led to the abdication of Nicholas II. The main one being him losing his credibility at the throne to his subjects and the people of Russia. In my opinion, there were many personal, political and economical reasons combined for which he was abdicated, but it was the military defeats, which set off the trigger.a History Essay Ovee Hasan Assess the extent to which the abdication of Nicholas II was caused by Military Defeats. 1 ...read more.