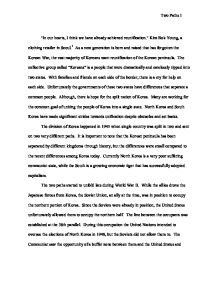 North Korea and South Korea after the Korean war.

"In our hearts, I think we have already achieved reunification." Kim Bok Young, a clothing retailer in Seoul.1 As a new generation is born and raised that has forgotten the Korean War, the vast majority of Koreans want reunification of the Korean peninsula. The collective group called "Koreans" is a people that were dramatically and carelessly ripped into two states. With families and friends on each side of the border, there is a cry for help on each side. Unfortunately the governments of these two states have differences that separate a common people. Although, there is hope for the spilt nation of Korea. Many are working for the common goal of uniting the people of Korea into a single state. North Korea and South Korea have made significant strides towards unification despite obstacles and set backs. The division of Korea happened in 1945 when single country was split in two and sent on two very different paths. It is important to note that the Korean peninsula has been separated by different kingdoms through history, but the differences were small compared to the recent differences among Korea today. Currently North Korea is a very poor suffering communist state, while the South is a growing economic tiger that has successfully adopted capitalism. The two paths started to unfold late during World War II. While the allies drove the Japanese forces from Korea, the Soviet Union, an ally at the time, was in position to occupy the northern portion of Korea. Since the Soviets were already in position, the United States unfortunately allowed them to occupy the northern half. ...read more.

Unfortunately he died of natural causes and the country formally mourned for their "Great Leader." His son, Kim Jong-Il took the informal throne of his father shortly after his death. After this transition the DPRK singed the Agreed Framework. The agreement was for the North to dismantle its nuclear reactors in exchange for oil and receive help building two light-water reactors. This seemed like real progress was being made to lighten the fear of nuclear arms.17 Unfortunately, in late August 1998 Kim Jong-Il test fired an intermediate-range missile over Japanese airspace and landed 1,380 km from North Korean coast. Testing this missile not only damaged relations with the Japan but with also the United states.18 Hong Soon-young stated in his article Thawing Korea's Cold War that "This sent a clear message to the world: that the North intended to remain not only a maverick communist holdout, but a muscular one, with regional military power." These actions go against the will and hopes of Seoul, Tokyo, and Washington, the hands that are literally feeding them. Although, some people such as Hong Soon-young believe Pyongyang has adopted a policy of "threats and blackmail" as means of survival.19 While the North tries to survive, the South is reaching out to help the impoverished neighbor. Many believe the North will fall in the long term or will have to make dramatic changes to stay alive. It is in the interest of the South to help the North have a "soft landing."20 Kim Dae Jung understands the agreements signed in the past did not bring "practical results." ...read more.