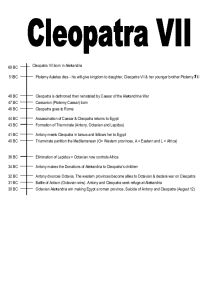 Notes on Cleopatra and her links with Rome

Historical Context Geography, topography and resources of Ptolemaic Egypt and its neighbours Geography and topography Alexander the Great died in 323 BC. The empire he left was too vast and unmanageable for any one person to govern. It was ultimately divided into three areas: Egypt of the Ptolemaic Dynasty; Greece, Macedonia and Asia Minor of the Antigonid Dynasty; and the Eastern lands including Persia, Syria and Mesopotamia of the Seleucid Dynasty. By 303 BC the Ptolemaic Dynasty emerged as the most prosperous and survived for 300 years, often despite its murderous and macabre rulers. Egypt, although surrounded by desert and sea, was a wealthy and prosperous country. The Nile river was its artery and it was worshipped and honoured by its people for the life that it sustained. The Blue Nile and the White Nile joined to form the Nile, the longest river the world. On its course it is bordered by cliffs until it reaches the delta marshlands. It cuts the surrounding deserts into the Eastern Desert extending to the Red Sea, and the Western Desert, reaching to the Libyan frontier. The Eastern Desert, unlike the barren Libyan Desert, contains wadis and a mountain range. A third desert, the Sinai, it open land and is crossed with wadis and hills. The Nile River travels through Upper or Southern Egypt to Lower or Northern Egypt, along the Nile valley, to the Delta and into the Mediterranean. Egypt had natural defenses due to its unique geographical position. Only its northern border was exposed, and this could only be approached by a narrow road through Pelusium, along the Palestine coast. It was also opened at the Delta via the Mediterranean Sea and the Nile. Resources The Produce of the fertile lands of the Nile was numerous - cotton, corn, barley, flax and rice. The surrounding areas produced many minerals including limestone, gypsum, alabaster, copper, iron, granite and tin. ...read more.

He built the Forum Julium with a glided statue of Cleopatra inside the Temple of Venus. Republican Romans hated Cleopatra. They saw her as a woman, a foreigner, a tyrant, an Easterner and an autocrat and despised her extravagant exoticism. They could only wonder what influence she was asserting on Caesar. The perpetual dictatorship confirmed their fears that Caesar wanted to rule alone, like a foreign monarch. Another law permitting Caesar to have as many wives as he wished was not passed, and would have cut close to the republican bone. On March 15, 44BC Caesar was murdered as the result of a conspiracy led by Brutus and Cassius. With Caesar's death Cleopatra's security and her splendid vision of Egyptian world supremacy, perhaps in partnership with Roma, were dashed. Neither Caesarion or Cleopatra were mentioned in Caesar's will due to their foreignness. Relationship with Mark Antony: eastern acquisitions and the 'donations' of Alexandria Octavian was Caesar's great nephew and legally adopted son. He was the inheritor of all that was Caesar's and this included the empire. At nine-teen, however he seemed too young and inexperienced to challenge Antony, Caesar's fellow consul, who was 40 years of age. Antony was determined to oppose Octavian and saw himself as the friend and successor of Caesar and at least in name, the legitimate had of state. Cleopatra returned to Alexandria, being justly afraid of Octavian, as she had wanted to impose her own son, Caesarion, as the rightful heir to Caesar while he was alive. However, neither Cleopatra nor Caesarion were acknowledged in Caesar's will and it would have been unlawful and unsustainable for Caesar to nominate Caesarion, to son of a foreign woman. The real shock, however, was that Octavian was favored above the front runner, Antony. Cleopatra's fleet was also in demand by Octavian and Antony, and Brutus and Cassius at this time. It was awkward for Cleopatra to have to show her colours so early in the fray. ...read more.

However, ultimately she failed to do all that she set out to do as Octavian eventually killed her children, took over Egypt and made it his personal providence. Legacy While she failed to complete her goals that she set out to, she managed to do the unthinking, bring Egypt into a powerful position in which they can oppose Rome. This was so unthinkable it was considered to be a non-issue, but Cleopatra used all the intelligence that she possessed and peaceful methods to bring this about. For this she is always remembered, and bought into a position of fame, as a woman to admire. Ancient and modern images and interpretations of Cleopatra VII Ancient Modern Pharsalia Roman Poet "Egypt's shame" "Fatal Beauty" "Wanton Daughter" Martin Bernal modern Chinese political history who claims Ancient Greece was heavily influenced by Afroasiatic "There is some doubt about the ethnicity of her grandmother who could have been Egyptian or Nubian" Horace Roman Poet "The queen ... Along with her polluted crew of Shamefully defile 'men" Joann Fletcher British Egyptologist "She was one of the most dynamic figures the world has ever seen" Propertius Latin Poet "indeed, the w***e queen of sinful Canopus" Amy Crawford "The real Cleopatra had charisma and her sexiness stemmed from her intelligence" Flavius Josephus Jewish writer in Rome "Antony was now bewitched by his love to Cleopatra" "Cleopatra had put to death all her kindred till on one near her in blood remained alive" Edith Flamarion "They become lovers" "She captivated not one, but two Caesars and made another, one who many claim was the greatest of the three, tremble" "Cleopatra's strength and yet another mark of her intelligence" "political perceptions" Plutarch Greek Historian writing some time after the events according to eye witness accounts "The charm of her conversation" "Plato admits four sorts of flattery, but she had a thousand" "Antony was so captivated by her" "The last and crowning mischief that could befall him came in the love of Cleopatra ... He fell into that snare thus" Laracombe Teichgradeber "She was charming, intelligent, powerful" ...read more.