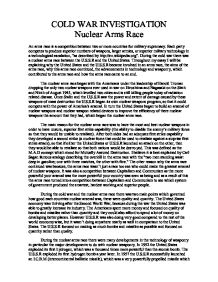 COLD WAR INVESTIGATION Nuclear Arms Race An arms race is a competition between two or more countries for military supremacy. Each party competes to produce superior numbers of weapons, larger armies, or superior military technology in a technological escalation, "as described by http://en.wikipedia.org". During the cold war there was a nuclear arms race between the U.S.S.R and the United States. Throughout my essay I will be explaining why the United States and the U.S.S.R became involved in an arms race, the aims of the arms race, why this arms race continued, the advancements in technology and weaponry, which contributed to the arms race and how the arms race came to an end. The nuclear arms race began with the Americans under the leadership of Harold Truman dropping the only two nuclear weapons ever used in war on Hiroshima and Nagasaki on the Sixth and Ninth of August 1945, which levelled two cities and is still killing people today of radiation related disease. Once Stalin and the U.S.S.R saw the power and extent of damage caused by these weapons of mass destruction the U.S.S.R began its own nuclear weapons program, so that it could compete with the power of America's arsenal. ...read more.

The other reason why the arms race continued was because, the arms race wasn't just a race too see who could make the greatest arsenal of nuclear weapons. It was also a competition between Capitalism and Communism as the more powerful your arsenal was the more powerful your country was seen as being and as a result of this the arms race turned into a competition between Capitalism and Communism to see which system of government produced the smartest, hardest working and superior people. During the cold war and the nuclear arms race there was two main points which governed how good each countries nuclear arsenal was, these were quality and quantity. The United States economy was thriving after the Second World War, because during the war the United States was able to greatly increase its industry. The Americans spent more money and focused on quality of bombs and missiles rather than quantity and they could also afford to spend a lot of money on developing better planes. However U.S.S.R was also doing very good compared to the rest of the world economy wise, but it wasn't doing anywhere nearly as well in comparison to the United States. ...read more.

The United States inadequacy to successful launch a satellite was a blow to her pride. During the 1960's the United States successfully fired an S.L.B.M (submarine launched ballistic missile). In the 1970's the U.S developed M.I.R.Vs which was a multiple re-entry targeted vehicle which aloud separate warheads on the one missile to be targeted at separate targets. The U.S.S.R developed M.I.R.Vs in 1977. Also in 1977 the United States tested the neutron b**b, which has a smaller explosion than the atom and hydrogen bombs, but emits large amounts of penetrating radiation. This b**b would be used, primarily on a battleground by artillery to take out enemy troop and armour positions, killing the soldiers but causing little damage to equipment. In 1983 the U.S president at the time Ronald Reagan announced the Star Wars project, which would use satellites and lasers to stop incoming missile attacks. By 1986, there were 40,000 nuclear warheads - the equivalent of one million Hiroshima bombs throughout the world. The highest numbers of nuclear warheads held by these powers was approximately 12,000 for the USSR and 10,000 by the US. This many nuclear weapons has the potential to destroy life on earth more than 1,500 times over. ...read more.