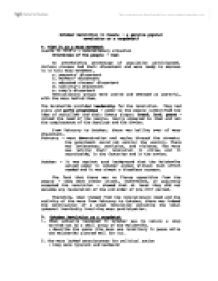 October Revolution in Russia - a genuine popular revolution or a coupdetat?

October Revolution in Russia - a genuine popular revolution or a coupdetat? A. View it as a mass movement Russia in 1910's - revolutionary situation Grievances of the people - real An overwhelming percentage of population participated. Various classes had their discontent and were ready to express it in this mass movement. a. peasants' discontent b. workers' discontent c. educated classes' discontent d. nobility's discontent e. army's discontent Revolutionary groups were active and emerged as powerful, with the mass behind them. The Bolsheviks provided leadership for the revolution. They had plans and party programmes - power to the people (simplified the idea of socialism) and their famous slogan: bread, land, peace - voiced the need of the people, really appealed to them and won the acquiescence of the populace and the armies. From February to October, there was boiling over of mass discontent. February - mass demonstration and raging through the streets; the government could not control the country. There was lawlessness, confusion, and violence. ...read more.

- decided the time was ripe because of the international war situation rather then the mass behaviour in Russia. 4. The Bolsheviks had only begun to be a majority in Soviets in August. They had not built up a dominant influence among the people, especially in the countryside. Even Lenin needed to take time to convince the Bolshevik leaders about the time for political takeover. 5. Post-1917 situation was a civil war - the Bolsheviks needed to impose and consolidate their authority in the country by force - reign of terror and the use of Cheka. - they had not gained popular support in October, at least not the kind of support in which the people genuinely identified their interests with the Bolshevik faith. - the civil war lasted for 2 years, could not be solely explained by the presence of foreign troops. - after they seized power, they cut opposition by banning political parties and imprison opponents. ------------------------- What is a coupdetat? ...read more.

- middle class still had hope to have a reform from above - armies still loyal to the Czar - revolutionary parties were weak The Czarist government tried to revitalize its rule by reforms but was insincere and thus failed. People discontent remained. Discontent accumulated and finally released in the First World War. Why 1917 revolution successful? Bolshevik's idea on the chance of a successful revolution: - Chaos in which only the party who know what they wanted would be the final victor. - First World War provided such a chance. (details on its effects on the ruling house) - Thus the time was ripe now, Nicholas II was forced to abdicate. But the revolution did not produce a democratic government as usually happened in other country because the middle class was weak and they were unprepared for it. So the Bolsheviks finally seized power as they had predicted in such a chaos. ----------- Russian Revolution in 1917 was the work of Lenin? Without Lenin, there would be no Bolshevik Revolution? It implies that the time was not ripe for revolution, the success of the Bolsheviks resulted from luck and opportunism of Lenin. ?? ...read more.