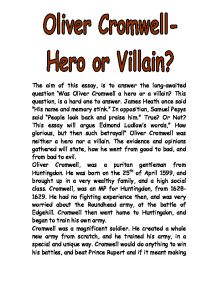 The aim of this essay, is to answer the long-awaited question 'Was Oliver Cromwell a hero or a villain? This question, is a hard one to answer. James Heath once said "His name and memory stink." In opposition, Samuel Pepys said "People look back and praise him." True? Or Not? This essay will argue Edmond Ludlow's words," How glorious, but then such betrayal!" Oliver Cromwell was neither a hero nor a villain. The evidence and opinions gathered will state, how he went from good to bad, and from bad to evil. Oliver Cromwell, was a puritan gentleman from Huntingdon. He was born on the 25th of April 1599, and brought up in a very wealthy family, and a high social class. Cromwell, was an MP for Huntingdon, from 1628-1629. He had no fighting experience then, and was very worried about the Roundhead army, at the battle of Edgehill. Cromwell then went home to Huntingdon, and began to train his own army. Cromwell was a magnificent soldier. He created a whole new army from scratch, and he trained his army, in a special and unique way. Cromwell would do anything to win his battles, and beat Prince Rupert and if it meant making a whole new army, than so be it. ...read more.

At the time, Cromwell felt that he was defending England's rights and interests. Cromwell also felt, that it was the right thing to do. I mean-all he had, was the authority of his army. Was Cromwell right to do this? Or was Charles I a Traitor and a Tyrant? The trial could also have been a farce, as some people thought. This was because some people thought that Oliver Cromwell had killed God's anointed one, as people believed very strongly in the Divine right of Kings. Oliver Cromwell also had his army sent out, to tell people to have him killed, and to support him, in all he did against Charles I. He made people fear him. Now, was that really the way, to gain support? Oliver Cromwell was moving out of Military stuff, and into Politics. Things were now becoming complicated, as England was now a republic. This meant that anyone could invade England anytime that they wanted. I think that Cromwell was going the wrong way because he was very good at military tactics, but those skills were not, and are not needed in the parliament, and it wasn't very useful either. Cromwell was also very involved in Ireland. ...read more.

And he also cancelled Christmas. Can you imagine living in those times, and how awful it must have been for them? Here, we come to the part where we decide what Oliver Cromwell was. Hero or Villain? I think that he was never anyone of those. I think that he was just doing what he believed in. If that meant making a few sacrifices, then so be it! I don't think that he killed one king, just to make another, but he just did what he felt he had to do. One thing which I agree on, is that he could have gone about it a different way. Also, I agree in one thing that he said, and also believed in. That was that "The end justifies the Means." What he meant by that, was that no matter what happens, something good always comes out at the end, and it's the end outcome that really matters. The words that I will leave you with, are the words of one Richard Baxter, a parliamentarian. We are not sure whether we can trust these words or not, as being a parliamentarian, he would have been a bit sympathetic to Cromwell, but it's quite reasonable. "No man was better and worse spoken of than he...he meant honestly...and was pious...till power corrupted him...he thinketh that the end being good and necessary, the necessary means cannot be bad..." ...read more.