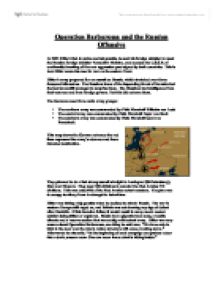 Operation Barbarossa and the Russian Offensive.

Operation Barbarossa and the Russian Offensive In 1941 Hitler tried to make one last gamble, he sent his foreign minister to meet the Russian foreign minister Vyaschlav Molotov, and accused the U.S.S.R. of continually breaking of the non-aggression pact signed by both countries. This is how Hitler made his case for war on the eastern front. Hitler's army prepared for an assault on Russia, which stretched over three thousand kilometres. The Russians knew of the impending threat of invasion but the Germans still managed to surprise them. The Russians has intelligence from their sources and from foreign powers. Yet this did not save them. The Germans used three main army groups: * The northern army was commanded by Field Marshall Wilhelm von Leeb * The central army was commanded by Field Marshall Fedor von Bock * The southern army was commanded by Field Marshall Gerd von Rundstedt. This map shows the German advance the red lines represent the army's advance and there intended destination. They planned to do a fast strong assault straight to Leningrad (St.Petersburg), Kiev and Moscow. They used 183 divisions to counter the Red Armies 170 divisions. This was only 54% of the Red Armies actual numbers. ...read more.

This was the real reason for the bulk of the German causalities during the Barbarossa Campaign. In the spring of 1942, the German army's showed none of the strength they had before. They had not enough resources to launch an attack this year, but Hitler decided that they would attack from the south. This avoided the main problem of supplying the whole front for a renewed offensive. This was an even greater gamble than before. If the Russians counter-attacked anywhere along the southern stretch, they could punch straight through the German front line. The Germans attempted to use their tactic of Blitzkrieg (Lightning Warfare). At the start of the southern offensive it worked causing the Russians to retreat back. By the sixth week of this renewed offensive the Germans had captured the much needed oil fields in Maikop in the Kursk/Kharkov sector. This was Russia's most desperate hour, what the Russians needed was a fresh army and new equipment, because at the moment the Russians had no where near enough artillery to match the Germans. To the Russians good fortune, Hitler had decided that only half of the southern army troops should attack the oilfields in Caucasus and the second half should attack Stalingrad (The city of Stalin). ...read more.

The Germans often described the Russians as having some sort of crazy passion, or inspiration from somewhere, either way the Russians used this tactic to its full advantage. The Russians were getting desperate now outnumbers and fighting in the rubble of what used to be one of there greatest cities they fought on with all the bravery they could muster. November 19th, the Russians initiated operation "Uranus" which was a counter offensive which caught the Germans totally off guard. The German 4th Panzer Army and the German 6th Panzer Army were trapped and on February 2nd Field Marshall von Paulus and his entire army surrendered. The Germans defeat at Stalingrad that started the beginning of the end for Hitler and the n**i regime. The battle of Kursk was probably one of the most momentous battles in all of World War 2, it was also the largest armoured battle in all of WW2. Kursk's surrounding area was of growing importance to the Russian front line. None the less, Hitler needed a victory in this area to gain the upper hand in the war in Russia. The place of importance was just to the south of Orel. Maloarkangelsk was the northern base and Kursk was the centre base with the base at the south being Belgorod. ...read more.