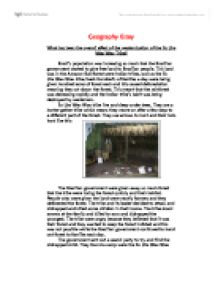 What has been the overall effect of the westernisation of the Eu Ura Wau Wau Tribe?

Geography Essay What has been the overall effect of the westernisation of the Eu Ura Wau Wau Tribe? Brazil's population was increasing so much that the Brazilian government started to give free land to Brazilian people. This land was in the Amazon Rainforest were Indian tribes, such as the Eu Ura Wau Wau tribe,lived.Hundred's of families a day were being given hundred acres of forest each and this caused deforestation meaning they cut down the forest. This meant that the rainforest was decreasing rapidly and the Indian tribe's habit was being destroyed by westerners. Eu Ura Wau Wau tribe live and sleep under trees. They are a hunter gather tribe which means they move on after a few days to a different part of the forest. ...read more.

They found a camp were the Eu Ura Wau Wau tribe were still living but had run away. The searchers left gifts at the camp like pots, pans, food and many other little gifts. The Indians came to collect the gifts and accepted them gratefully. The searchers came into contact with the tribe soon after and gave them a food each day. By doing this the tribe put themselves at danger as many bad and good things happened to them after they met the western searchers. The good things that happened to them after they meet the westerners were that they gained food and medicines from the government. The bad things that happened were that 1 in 6 people died in the tribe due to diseases that westerners bought them and the tribe had no restiance against the diseases. ...read more.

Her mother and auntie both died. Tarri and his sister meet up many years later. There were many differences between Tarri and his sister even through they were the same culture. They had different languages, they ate different food, different lifestyle, his sister has 6 kids and he has none, he kids go to school, she has no teeth and he has teeth. The main difference is they life as she lives in a westerner town and he lives in the rainforest even through they are both 100% Indian. I think the westernisation of the Eu Ura Wau Wau tribe was a bad thing as many of the tribe died and they had to change their lifestyle completely. The tribe lost most of their traditions and the ended up living in a different tribes hut. ...read more.