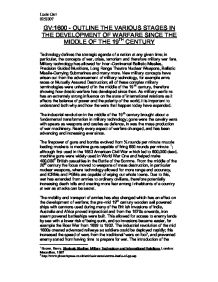 GV:1600 - OUTLINE THE VARIOUS STAGES IN THE DEVELOPMENT OF WARFARE SINCE THE MIDDLE OF THE 19TH CENTURY Technology defines the strategic agenda of a nation at any given time; in particular, the concepts of war, crisis, terrorism and therefore military warfare. Military technology has allowed for Inter-Continental Ballistic Missiles, Precision Guided Munitions, Long Range Theatre Nuclear Weapons, Ballistic Missile-Carrying Submarines and many more. New military concepts have arisen out from the advancement of military technology, for example arms races or Mutually Assured Destruction; all of these complex military terminologies were unheard of in the middle of the 19th century, therefore showing how drastic warfare has developed since then. As military warfare has an extremely strong influence on the state of international relations as it affects the balance of power and the polarity of the world, it is important to understand both why and how the wars that happen today have expanded. The industrial revolution in the middle of the 19th century brought about a fundamental transformation in military technology; gone were the cavalry wars with spears as weapons and castles as defence, in was the mass production of war machinery. Nearly every aspect of warfare changed, and has been advancing and increasing ever since. ...read more.

Technology in the late 20th century extended methods of protection to Electronic Counter Measures to locate enemy weapons even before they are deployed - the ultimate method of protection. This would not have been possible without the advancement in artificial intelligence through sophisticated computers to perform operations such as detecting long-range missiles from satellite cameras. The advancement of military warfare is due to a number of things: the progression of science and development of human intelligence mainly as a result of better education and more of a desire to be all-knowing has created more effective and practical ideas for warfare. In addition, the influx capitalism after the industrial revolution has meant that the munitions industry has profit to be made, and as capitalism seems ever increasing the production of weapons has also amplified. Also, countries around the world have increased their defence spending budgets therefore more money is constantly being spent on inventing the best, most destructive, powerful weapons. This, along with the enlarged competition between states to have the most advanced technological warfare machinery has led to a number of disputes which set the agenda for international relations at the time. The Cold War between Russia and the United States from the middle of the 20th century until the collapse of the ...read more.

This creates the problem of not knowing where to attack, and counties such as America attacking countries like Afghanistan just because they believe they were harbouring terrorists after the September the 11th attacks. It is likely that warfare technology will advance in the future despite the disarmament issue over the past few decades. While superpower countries like the United States continue with their arms building, refuse to ratify the Nuclear Test Ban Treaty or participate in talks regarding the Antiballistic Missile Treaty in June, and continue to own 95% of the 31,000-plus nuclear weapons along with Russia6, the Doomsday Clock might actually reach midnight. After World War One, Sir Edward Grey said that the horrors of the Great War would make it possible for states 'to find as least one common ground on which they should come together in confident understanding: an agreement that, in the disputes between them, war must be ruled out as a means of settlement that entails ruin'7. Obviously, this idea seems much too idealistic when we look back at the technological advancements in warfare since World War One, which can maybe suggest that states will always dispute and technology will always advance - the terrifying thought of a future super-war is very possible. ...read more.