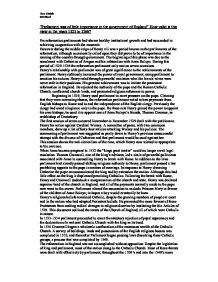 &quot;Parliament was of little importance in the government of England&quot; - How valid is this view in the years 1525 to 1566?

"Parliament was of little importance in the government of England" How valid is this view in the years 1525 to 1566? Pre reformation parliaments had shown healthy institutional growth and had succeeded in achieving cooperation with the monarch. However during the middle reign of Henry viii was a period known as the parliaments of the reformation, although occasionally called upon they did prove to be of importance in the running of the country through government. The beginning of this phase was due to the annulment with Catherine of Aragon and his infatuation with Anne Boleyn. During this period of 1529-1536 the reformation parliament only met on seven occasions. Henry's relationship with parliament was of great significance to the achievements of the parliament. Henry ruthlessly increased the power of royal government, using parliament to sanction his actions. Henry ruled through powerful ministers who like his six wives were never safe in their positions. His greatest achievement was to initiate the protestant reformation in England. He rejected the authority of the pope and the Roman Catholic Church, confiscated church lands, and promoted religious reformers to power. Beginning in 1529, Henry used parliament to exert pressure on the pope. Claiming that they were correcting abuses, the reformation parliament voted to ban payments from English bishops to Rome and to end the independence of the English clergy. Previously the clergy had owed allegiance only to the pope. ...read more.

He established separate departments of state, with their own collectors, secretaries, and judges, to receive the wealth confiscated from the church. These courts, as they were called, were able to resolve disputes quickly and prevented the traditional royal courts from being overburdened with cases. Cromwell served as the effective head of Henry's government for eight years and he was left alone to run it. After the civil wars of the preceding century that had weakened the monarchy, Henry viii re-established the power of the English crown. This was done largely through the work of his powerful ministers Wolsey and Cromwell. They made use of the new Privy Council and parliament, whose members included the aristocracy and gentry. As these groups were brought into government, their individual ability to challenge the king diminished. The confiscation of church wealth enabled Henry's heirs to rule without new revenues for the rest of the century. In 1547 Edward succeeded his father as king of England, with his reign brought a decrease in royal authority, of which Henry had greatly established during his reign. Through Edwards reign and indeed his sisters, Mary, the government during this time dictated the religious course in England. A protestant reformation under Edward and a papal-Catholic restoration in Mary's reign. People like the Protector Somerset and the Duke of Northumberland participated in moderate to radical reform, as well as the Marian reaction. All of which were enacted by the authority of the parliament. ...read more.

Forgery and perjury were also attacked; the court also punished subornation of perjury which another act of 1563 deemed a misdemeanour when committed in cases concerning lands, goods, debts or damages in any court of record. This was seen as a legal landmark as the act enforced higher standards in the central courts and in locally at assizes the quarter sessions as well as in the ecclesiastical courts. Parliamentary importance in government ranged from low to high during the Tudor reign between 1525 to 1566. Henry viii succeeded in a successful parliament and government due to great councillors such as Wolsey and Cromwell. The relations between Henry and his parliament were unique; he took great interest in the progress of the parliament. Even though he kept the parliament under his full control, he called repeated sessions of the parliament to take major decisions. This relationship with his councillors and their role enabled parliament to be of significant importance during Henry viii's reign. However Edward and Mary were surrounded by many factors hindering parliamentary success such as economic loss, leading to parliament being of little significance in government. Elizabeth, on the other hand had a good relationship with her parliament and members of the Privy Council. Thus enabling a number of acts and policies to be passed in a short period of parliament meetings, such as the acts of embezzlement. An overall opinion is that parliament importance in government depended greatly on varying factors, the attitude and relationship of the monarch, the situation of England and the necessity of essential councillors to direct the parliaments importance in government. Theo Christie Mrs Bland ...read more.

A lot can be learnt from this essay about the dangers of slipping in to narrative and missing the point of developing an argument. the writer knows a lot about the period and is able to write about the events and people of the time but they do not address the issue in the question directly enough and this could keep the essay right down in the lower levels of any mark scheme. Planning is essential and each paragraph must open with a key point relating to the argument. If the introduction sets out the argument then the writing can keep returning to it.