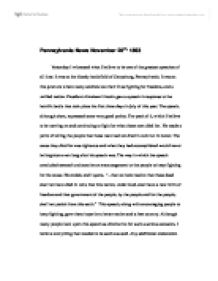 Pennsylvania News November 20th, 1863 Yesterday I witnessed what I believe to be one of the greatest speeches of all time. It was at the b****y battlefield of Gettysburg, Pennsylvania. It was at this juncture where many soldiers lost their lives fighting for freedom, and a unified nation. ...read more.

He made a point of telling the people that those men had not died in vain but in honor. The cause they died for was righteous and what they had accomplished would never be forgotten even long after his speech was. The way in which the speech concluded seemed to almost be an encouragement to the people to keep fighting for the cause. ...read more.

This speech, along with encouraging people to keep fighting, gave them hope for a better nation and a free country. Although many people look upon this speech as diminutive for such a serious occasion, I believe everything that needed to be said was said. Any additional elaboration on the subject might have made the speech drawn out and off target. Overall I believe that this speech was appropriate as well as influential. ...read more.