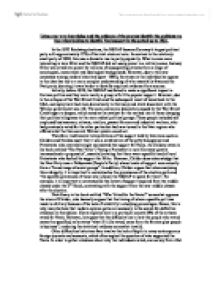 Using your own knowledge and the evidence of the sources identify the problems we face when looking to identify n**i support in the period up to 1933. In the 1932 Reichstag elections, the NSDAP became Germany's largest political party with approximately 37% of the total electoral vote. In contrast to the relatively small party of 1928, this was a dramatic rise in party popularity. What is even more interesting is how Hitler and the NSDAP did not usurp power in a military sense. Instead, Hitler was voted into power by millions of unsuspecting citizens from a range of sociological, economical and ideological backgrounds. However, due to this new consensus among modern historians (post -1980), the stress on the individual as oppose to the class has led to a more complex understanding of who essentially favoured the n**i party; deeming it even harder to identify empirical evidence from sources. Initially, before 1928, the NSDAP had failed to make a significant impact in German politics and they were merely a group with little popular support. ...read more.

However, Childer does acknowledge that the n**i Party was a Volkspartei (People's Party) whose levels of support were actually from a "broad range of social groups". In addition, Childer argues that when analysing this ambiguity, it is important to contextualise the provenance of the election polls and "the specific grievances of those who [chose] the NSDAP to speak for them". For example, it is important to contextualise the extent of support acquired from the middle classes under the 2nd Reich, contrasting with the support from the new middle classes after the election. d**k Geary in his book entitled "Who Voted for the Nazis?" somewhat opposes the view of Childer, who basically argues that the timing of when a specific poll was made is arbitrary because of the lack of reliability in studying percentages. Hence, this is why many believe that modern opinion polls are necessary in the search for definitive evidence on the subject. Geary explains how in a particular county 28% of the artisans voted for Nazis. ...read more.

This severe lack of genuine support for the Nazis even resounds in the opposition to the Hitler Youth; namely the Navajos, Pirates and the Black gang, who would attack anyone in the Hitler Youth because of their following of the n**i regime. In the last twenty years, a number of problems have been countered when analysing the statistical methodology and sources of the n**i era. This has inevitably given birth to the complex views proposed by Falter and Brustein, who posit that German workers were far more attracted to the Nazis than many have argued in the past. However, one fundamental issue that cannot be solved is the difficulty in measuring the honest thoughts of the German public and whether or not the lack of any pre-existing loyalties (political or religious) aided the Nazis significantly. Having said this, there is an overwhelming amount of evidence which still stresses that the Mittelstand and the Protestant communities voted disproportionately in favour of the Nazis more so than any other class. ?? ?? ?? ?? ...read more.