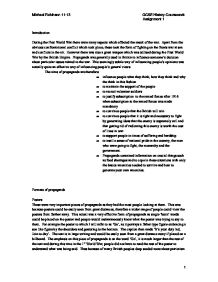 'Propaganda Was an Essential Weapon In the War Against Germany&amp;#146; - To What Extent Do You Agree With This Opinion On the Role of Propaganda As Used By the British Government During World War One?

Introduction During the First World War there were many aspects which effected the result of the war. Apart from the obvious confrontational conflict which took place, these took the form of fighting on the fronts war at sea and conflicts in the air. However there was also a great weapon which was utilised during the First World War by the British Empire. Propaganda was generally used in Britain to influence someone's decision about particular issues related to the war. This seemingly subtle way of influencing people's opinions was actually quite an effective way of influencing people's general views. The aims of propaganda are therefore: * influence people what they think, how they think and why the think in this fashion * to maintain the support of the people * to recruit volunteer soldiers * to justify subscription to the armed forces after 1916 when subscription to the armed forces was made mandatory * to convince people that the British will win * to convince people that it is right and necessary to fight by generating ideas that the enemy is supremely evil and that getting rid of radicating this enemy is worth the cost of lives in war. * to support people in times of suffering and hardship * to instil a sense of national pride in the country, the men who were going to fight, the monarchy and the government. * Propaganda contained information on crucial things such as food shortages and to cope in these situations with only the basics amenities needed to survive and how to generate your own amenities. Formats of propaganda Posters These were very important pieces of propaganda as they had the most people looking at them. This was because posters could be easily seen from great distances, therefore a wider range of people could view the posters from further away. This actual was a very effective form of propaganda as single 'buzz' words could be placed on the poster and people would instantaneously know what the poster was trying to say to them. ...read more.

At the bottom of the advert is the words ' Join to-day', this I believe is a final prompt to join the army. The text is obviously just as important as the picture as the mother type figure seems to be gesturing towards the words. Also the words are in an uppercase font so that if a person is far away they may not be able to see the illustration but they will see the wording. Another poster which promotes enlisting in the army but is apparent from a different approach is the 'Daddy what did YOU do in the Great War.' This depicts a girl child sitting on the lap of her father sometime in the future after the great war and a boy child sitting at his feet playing with some toy army vehicles. The girl is reading a book when she asks the question indicting she is reading some sort of history book. The father is obviously contemplating the question and has a worried look on his face. This image is meant to depict the child getting ready for her father's response about he was in the war fighting for what he believed, while the father ponders how he is going to tell his proud daughter that he was a coward and did not enter the war. This plays on the conscience of the observer who will put himself in that situation. Of course this person does not want to have to play this scenario so they enlist to show they are not cowardly. This poster basically says join the army and defend your family and country and be a hero, or do not join and live your life as a coward. The advert obviously puts forward the statement that the war will not damage the sociality of Britain much as the people in the advert seem to be well off and happy. ...read more.

The honour in defending your family and country against the enemy was something everyone was raised to believe in, in those days. George Weill commented, 'each of the warring nation's persuaded itself that its government had neglected propaganda, whereas the enemy.........had been most effective', in these other states propaganda was free to flow throughout the country and most likely it did. Therefore this argument that a country lost the war due to propaganda seems like a front. I believe this front is an excuse to take the blame off themselves by saying that we lost the war due to propaganda and not because of our ability to fight in wars. As I believe that these countries felt it would be more appropriate and less humiliating to blame something which sounds insignificant like propaganda, rather than blaming their own abilities which were considered significant aspects in defending their country. I believe that propaganda was important in the Great War but only to a certain extent, it was very good for the preparation of war but did nothing to influence the actual battles themselves. Propaganda did not help a soldier to fight better; it may have given him an incentive but did not get him to fight better. Propaganda was mainly used to influence the people in Britain, but as soon as the required task was achieved the propaganda ceased. For example once a man had enlisted as a soldier propaganda became ineffective. It was very good for raising funds, morale and hostility all the things needed to battle in the war but the eventual outcome I think was down to the people who were effected by propaganda least, the soldiers. I can put my thoughts into this analogy, propaganda is the fuel which is placed upon the wood to help a fire burn the soldiers are the fire. Without the fuel the fire burns but not as brightly or with as much vigour, however without the fire the fuel is useless. Michael Robinson 11:13 GCSE History Coursework Assignment 1 1 ...read more.