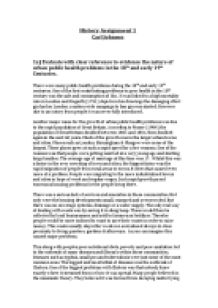 Public health in the 18th Century

﻿History Assignment 1 Carl Johnson 1a) Evaluate with clear reference to evidence the nature of urban public health problems in the 18th and early 19th Centuries. There were many public health problems during the 18th and early 19th centuries. One of the first contributing problems to poor health in the 18th century was the sale and consumption of Gin. It was linked to a high mortality rate in London and Hogarth (1751) depicts in his drawings the damaging effect gin had on London, a nation wide campaign to ban gin was started. However due to an outcry from people it was never fully introduced. Another major cause for the growth of urban public health problems was due to the rapid population of Great Britain. According to Fraser (1984) the population of Great Britain doubled between 1801 and 1851, then doubled again in the next 60 years. Much of the growth was in the larger urban towns and cities. Places such as London, Birmingham & Glasgow were some of the largest. These places grew at such a rapid speed for a few reasons. One of the reasons was that people were getting married at a very young age and starting large families. The average age of marriage at this time was 17. Whilst this was a factor in the over crowding of town and cities, the biggest factor was the rapid migration of people from rural areas to towns & cities that caused even more of a problem. ...read more.

People saw this as inference and believed they were actually doing more damage than good. Due to the poor standard of living conditions, Cholera began to spread at a very high rate causing the government to panic. In 1831 the board of health gave a description of the symptoms of cholera. A newspaper in Sunderland then reprinted as it was a port and It was believed that a port was the most likely place for the disease to be found and spread. The local council found in order to protect its residents, it would place various regulations and notices up to protect people. The port was then placed into quarantine. Local fishermen and business people, who argued cholera did not enter through the port, saw this as a major interference. Which did more damage than good. 1c) Analyse the barriers, which lay in the way of reform of public health in the first half of the 19th century. Public health reform was very slow in the early part of the 19th century, this was because there were many barriers it faced in making changes. One of the most difficult of barriers was money and paying to make the changes. The proposed health act stated that housing communities should be provided with a water and sewerage system. This was something that was costly and very time consuming which would also need to be paid for by taxpayers. ...read more.

Which would help to monitor public health. Great principles held by people such as Joe Chamberlain who was a successful businessman within the industrial world. Chamberlain was elected as a town councilor in 1869. Who then went on to help reform Birmingham by the clearing of the slums and re-designing of the town center. Principles also held by another man, Titus salt who again was a successful businessman, this time in textiles. Who after being elected mayor and then MP helped to build safer and more work friendly factories, three different types of housing options and hospitals and schools. Both of these men had dramatic effects towards reform as they had a voice, which was heard by government. 1e) Assess the view that the public health act of 1848 was a limited response to the need for reform. The public health act of 1848 was very limited for a few reasons. Firstly it was only set out for 10 years, this alone was going to be a constraint. But more importantly the act only made recommendations. It was not compulsory for towns and cities to abide by. Towns and cities were reluctant to follow it, as the recommendations they proposed were very expensive. Many builders, landlords and companies complained about making the improvements. Only 182 towns set up local boards of health after recommendations to do so and only 13 of the 182 boards built sewerage and waterworks. The act was abolished after the board of health persuaded the government and Chadwick being one of the members was sacked. ...read more.