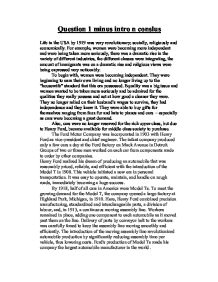 Question 1 minus intro n conslus Life in the USA by 1919 was very revolutionary; socially, religiously and economically. For example, women were becoming more independent and were being taken more seriously, there was a dramatic rise in the variety of different industries, the different classes were integrating, the amount of immigrants was on a dramatic rise and religious views were being expressed very noticeably. To begin with, women were becoming independent. They were beginning to earn their own living and no longer living up to the "housewife" standard that this era possessed. Equality was a big issue and women wanted to be taken more seriously and be admired for the qualities they really possess and not at how good a cleaner they were. They no longer relied on their husband's wages to survive, they had independence and they knew it. They were able to buy gifts for themselves ranging from faux fur and hats to pianos and cars - especially as cars were becoming a great demand. Also, cars were no longer reserved for the rich upper class, but due to Henry Ford, became available for middle class society to purchase. The Ford Motor Company was incorporated in 1903 with Henry Ford as vice-president and chief engineer. The infant company produced only a few cars a day at the Ford factory on Mack Avenue in Detroit. ...read more.

Exports also increased dramatically in this time. Chemical rose from 21.9 ($ millions) to 281, Wheat from 87.9 to 298.2 and lastly Iron and Steel from 251.5 to 1133.7. Unfortunately, not all consequences were as rewarding. Unemployment and strikes were increasing dramatically. Four million soldiers were demobbed in 1919. At the same time, industries, geared up to high levels or production during the war, laid off workers so returning soldiers were lucky to find employment. There was more trouble on the work front. Prices had doubled between 1914 and 1919 but wages had hardly risen at all. Workers demanded higher wages but bosses knew that high unemployment gave them a strong hand, and were unwilling to compromise. With so many other unemployed people wanting jobs, bosses knew they could easily find replacement that wouldn't question their wages. Also, there were fears of radicalism. In Europe the war had triggered the Communist revolution in Russia. And in the USA, the home of capitalism, two Communist parties were established in 1919. Anarchists started a wave of bomb attacks. The rise of Communism combined with the violent strikes by workers, made people terrified that revolution was spreading to the USA. There were Race riots to deal with as well. In twenty-three across the USA, there were race riots in 1919. Many black people, who had moved to northern citied from the South after 1910, found themselves under attack from the white communities around them. ...read more.

A second faction favoured a "broad gauge" approach, offering positions on a full range of national issues in an attempt to build a larger coalition in support of dry candidates. The campaign began to get influential supporters. Big businessmen believed that workers would be more reliable if they did not drink and congressmen have their support to gain votes in rural areas. Those who campaigned saw alcohol as a moral danger, particularly in the cities that were centres of large immigrant populations. Many new immigrants were Catholics from southern and eastern Europe bringing with them different languages and cultures to the older immigrant WASP populations. Life in cities such as New York was changing fast and many rural areas saw these changes as a threat to their traditional way of life. Higher crime rates in cities were also blamed on alcohol. When the USA entered WW1 in 1917, prejudice also turned against the brewers of alcohol, many of whom were German. To drink alcohol they argued was unpatriotic. Many temperance organisations were middle class women's groups, motivated by a desire to "reform" what they saw as the bad habits of the working class and drunkards from their own weakness. Women, they argued were most affected by drink when husbands spent wages in the bars and saloon and came home drunk. Other arguments were that drink was a waste of grain for food, it caused a drop in the efficiency of workers and therefore less was produced in factories and on farms and that alcohol led to death on the roads. 2,472 words ...read more.