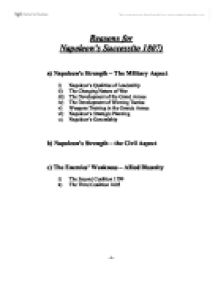 Reasons for Napoleon's Success(to 1807) a) Napoleon's Strength - The Military Aspect i) Napoleon's Qualities of Leadership ii) The Changing Nature of War iii) The Development of the Grand Armee iv) The Development of Winning Tactics v) Weapons Training in the Grande Armee vi) Napoleon's Strategic Planning vii) Napoleon's Generalship b) Napoleon's Strength - the Civil Aspect c) The Enemies' Weakness - Allied Disunity i) The Second Coalition 1799 ii) The Third Coalition 1805 a) Napoleon's Strength - The Military Aspect i) Napoleon's Qualities of Leadership * One of Napoleon's great strengths as leader was the devotion of his men. His soldiers adored him. * Despite his generally unprepossessing appearance, when he wished to charm he could quickly win over anyone he met, however initially hostile they might be. Within a couple of days he had completely captivated the officers and crew of Bellerophon taking him to St. Helena in 1815, much alarming the British government. * One Admiral at that time exclaimed, "If he had an obtained an interview with His Royal Highness the Prince Regent, in half an hour they would have been the best friends in England!" * His contemporaries had no doubt about the charismatic quality of leadership. His great adversary Wellington said to him that the moral effect of his presence in the field and worth an additional force of 40,000 men to the French army. This he ascribed to Napoleon's dual position as both head of state and commander-in-chief, which gave him unparalleled control over events, but also to his great personal popularity with the army. * One of Napoleon's own generals explained this popularity by saying that it "was by familiarities that the Emperor made his soldiers adore him, but it was a means available to only to a commander whom frequent victories had made illustrious; any other general would have injured his reputation by it". ...read more.

In October her army was defeated at Ulm and she made a separate peace with France. * Prussia, resentful of pressure from Napoleon to supply him with troops and to join the Continental Blockade against Britain, eventually declared was on France in August 1806. However, her adherence to the coalition was as short-lived as Austria's had been. Her army was totally defeated in October at the twin battles of Jena-Auerstadt. The most powerful army of the Ancien regime had been destroyed by Napoleon's new style warfare. * Russia, Britain's other ally, had been involved in a distracting war with the Ottoman Empire by the end of 1806. Taking advantage of this, Napoleon launched an attack through Poland, and in the spring in 1807 won a decisive victory over the Russians at Friedland. * Afterwards he was able to exploit the tsar's resentment over the inactivity of Britain and Austria and the poor military showing by Prussia during 1806. At their private meetings at Tilsit in June 1807 Napoleon entirely captivated Alexander, who formally allied himself with France. * Prussia and Austria were left to the mercy of Napoleon. Both emerged greatly weakened from the peace settlement, losing influence and territory and being burdened with the payment of heavy war indemnities to France. * The Third Coalition was dead. Only Britain, which since 1805 had played no part in Europe other than that of paymaster, still remained at war with France. Once again, Napoleon ended had succeeded admirably in playing on divisions between the allies, and then in picking them off one by one. Reasons for Napoleon's Decline and Fall (1808-15) a) The Military Situation b) The Allies United i) The Fourth Coalition 1813-15 ii) Final Defeat and the end of Napoleonic Europe In the final campaign against Napoleon, France's military difficulties were exposed. What were the reasons? * The Spanish and Russian 'disasters' had sapped morale. ...read more.

* After Napoleon's final abdication and exile in June, the second Treaty of Paris (November 1815) reduced the frontiers of France still further to those of 1790. * There remained the problem of the territories of the French Empire and of the satellite states. Each of the allies had different views on what should be done and great power unity was constantly threatened by suspicion and disagreement. However, it was accepted by all the allies that France needed to be contained within her revised frontiers and that this could be best done by surrounding her with a ring of buffer states - not the weak and feeble neighbours who had collapsed in 1792-3, but strong, potentially hostile states would prevent any future French aggression. * To the south, Austrian influence was restored in northern Italy in Lombardy and Venice, and a newly strengthened kingdom of Sardinia-Piedmont (including nice, Genoa and Savoy) guarded the Italian frontier with France; to the north, Belgium was united with an independent Holland behind a fortified frontier with France; while to the east, Switzerland's guaranteed independence barred the way, as did the Rhinelands, now a part of Prussia. * In this way the frontiers which France had threatened mostly often during the seventeenth and eighteenth centuries were blocked off. * As far s the satellite states were concerned it was generally, though not completely, conservative settlement. In Italy, Naples was returned to Bourbon rule and the other states were restored to their pre-1796 boundaries and mostly to their former ruling families. * The Papal States were returned to the Pope. In Germany, Napoleon's general suppression of a large number of minor German states was confirmed and 41 (later reduced to 38) sovereign states were brought together in a new German Confederation, whose borders were not dissimilar to those of the old Holy Roman Empire. * Russia acquired most of the Poland and Spain was returned to Bourbon rule. * The map of Europe again looked much the same as it had done in the eighteenth century, the Napoleonic Empire had disappeared. - 1 - ...read more.