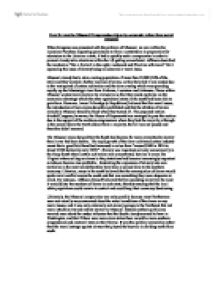 Reasons for the Missouri Compromise

How far was the Missouri Compromise driven by economic rather than moral reasons? When Congress was presented with the problem of Missouri, an area within the Louisiana Purchase requesting permission to form a constitution in preparation for admission to the Union as a state, it had to quickly seek a compromise in order to prevent already stale situations within the US getting exacerbated. Jefferson described the incident as "like a fire bell in the night, awakened and filled me with terror" for it opened up the issue of slavery being an economic v moral issue. Missouri already had a slave-owning population of more than 10,000 (16% of the total) and they wanted a further increase of slaves, as they believed it was needed due to the vast spread of cotton cultivation and the slave owning which was spreading rapidly up the Mississippi river from Alabama, Louisiana and Arkansas. ...read more.

The rapid growth of the slave-cultivated cotton industry meant that a good field hand had increased in value from "around $500 in 1814 to about $1100 dollars by early 1819". Slavery was important not only economically in the Deep South where cotton cultivation was concentrated, but also in areas like Virginia where selling on slaves to the plantations had become increasingly important as tobacco became less profitable. Restricting the expansion of slavery into new territories in the west would therefore have been a serious blow to the southern economy. Likewise, many in the south believed that the emancipation of slaves would spark racial conflict across the south and that was something they were desperate to avoid. For instance, Jefferson himself believed that by expanding slavery to the west it would dilute the numbers of slaves in each state, thereby ensuring that the local white populations could remain in control and could keep their economy functioning. ...read more.

Many of the Northerners were increasingly concerned at the disproportionate political influence of the southern slave-owning elite. The population of the north was by now far larger than that of the south, but under the constitution the south's representation in congress was larger than it might have been because 3/5ths of the slave population counted for the purposes of representation. Due to this many northerner's claimed they were fighting against slavery for "moral" reasons, whilst in reality it was purely to limit the south from becoming too powerful politically, plus the southern economy was based on the existence of slavery - if slavery was abolished the southern states would not be able to compete industrially with the north as they would not have the funds, thereby giving the north a significant advantage. Therefore it made sense for the Northern's to claim they opposed Missouri having slaves due to "moral issues" on slavery, whilst in reality it was more because of economic and political reasons. ...read more.