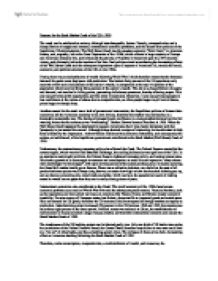 Reasons for the Wall Street Crash of 1929.

Reasons for the Stock Market Crash of the USA 1929 The crash can be attributed to various, although interchangeable, factors. Namely, overproduction and a disequilibrium of supply and demand, international economic problems, and the laissez-faire policies of the Republican US administration. The Wall Street Crash was the greatest economic "Slow Down" in American history, and, arguably, led to the Great Depression of the 1930s, which affected a large majority of Europe and American industrial life, and influenced the policies of Franklin D Roosevelt upon his 1933 election victory, and ultimately led to the inaction of his New Deal policies aimed at combating the devastating effects of the Wall Street Crash and the subsequent depression upon all aspects of American life, namely the social, economic, and political structure of the USA in the 1930s. Firstly, there was a misdistribution of wealth following World War I which therefore meant that the domestic demand for goods never kept pace with production. ...read more.

Herbert Hoover became President in 1928. When the Wall Street Crash happened he attempted to reassure Americans that it was merely temporary and that 'prosperity is just around the corner'. Although things showed no signs of improving, he was reluctant to help those affected by the Depression. Andrew Mellon reinforced this economic orthodoxy, and consequently the actions, or lack thereof, of the Republican government contributed to the Stock Market (Wall Street) Crash of 1929. Furthermore, the contractionary monetary policy also affected the Crash. The Federal Reserve controlled the money supply, which was the Gold Standard Exchange, thus selling dollars also sent gold out of the USA. In an attempt to restrict gold outflows, the Federal Reserve tightened monetary policy, and raising interest rates. This harms growth as it discourages investment and consumption as credit it more expensive. Many shares were also bought "on the margin", with up to seventy percent of the actual purchase price. ...read more.

Manufacturing output increased fifty percent in the US between 1920 and 1929, but exports rose only thirty eight percent in the same period. Political unrest was endemic in China, the establishment of Communism in Russia excluded a large overseas market, and therefore international concerns also caused the Stock Market Crash of 1929. The weaknesses of the US banking system can be blamed partly, too. Only one third of US banks were under the jurisdiction of the Federal Reserve Board; the Central Bank, therefore crop failure in one state could lead to a "run on" of other banks, and thus a banking system crisis. The collapse of share prices had a devastating effect on American banking following the Stock Market Crash of 1929. Therefore, under consumption, overproduction, a maldistribution of wealth, and moreover, the overwhelming grip of capitalism on all aspects of American life; social, economic and political; were equally poignant as to the reasons for the Stock Market Crash (Wall Street Crash) of 1929, in New York, USA. I believe capitalism to be of the most importance of any factor. ...read more.