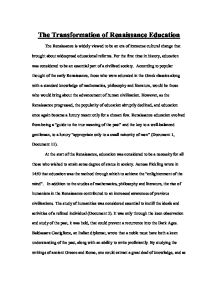 The Transformation of Renaissance Education The Renaissance is widely viewed to be an era of immense cultural change that brought about widespread educational reforms. For the first time in history, education was considered to be an essential part of a civilized society. According to popular thought of the early Renaissance, those who were educated in the Greek classics along with a standard knowledge of mathematics, philosophy and literature, would be those who would bring about the advancement of human civilization. However, as the Renaissance progressed, the popularity of education abruptly declined, and education once again became a luxury meant only for a chosen few. Renaissance education evolved from being a "guide to the true meaning of the past" and the key to a well-balanced gentleman, to a luxury "appropriate only to a small minority of men" (Document 1, Document 11). ...read more.

It was through such study that one would establish "dignity and reputation" (Document 6). Thus, at the early onset of the Renaissance, education was considered an essential determinant of social stature, and the gateway to success. As the Renaissance progressed, the notion of education as previously defined in the period changed dramatically. Contrary to preceding thought, education should focus on that which is "useful in worldly life." By focusing too much on the liberal arts, "permanent harm" could result to a student not trained with virtue and discipline (Document 7). Michel de Montaigne called the educational system "absurd" and that rather than focusing on works with "the soundest and truest opinions", education had instead revolved around the works "which speak the best Greek and Latin" (Document 8). This is a clear change from the attitude of the early Renaissance, which hailed the study of the classics as the path to illumination. ...read more.

They maintained that education should "prepare men for action", or in other words, to prepare men to be workers and laborers (Document 12). Towards the end of the Renaissance, education came to be thought of as vain and ineffective. Renaissance education transformed from being considered the way to attain success, to a futile and pointless venture meant only for a small alternative group of men. At its start, the rise in Humanism encouraged education to be focused around the study of Greek and Roman classics as the gateway to knowledge. As the Renaissance advanced, this was discarded and replaced by the study of religion and ethics. Towards its later stages, education was thought of as unnecessary for the majority of the population, and was considered applicable only a small group of scholars, priests and magistrates. Clearly, Renaissance education experienced drastic changes, paralleling the massive cultural changes that came about under the era. ...read more.