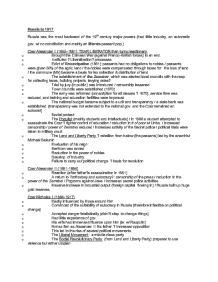 Russia to 1917 Russia was the most backward of the 19th century major powers (had little industry, an autocratic gov. w/ no constitution and mainly an illiterate peasant pop.) Czar Alexander II (1855-1881): TSAR LIBERATOR then turns reactionary o Brought the Crimean War (against Franco-British forces) to an end. o Instituted ? Liberalization? processes o Edict of Emancipation (1861): peasants had no obligations to nobles / peasants were given 50% of the agric. land / the nobles were compensated through taxes for the loss of land / the commune (Mir) became a basis for tax collection & distribution of land o The establishment of the Zemstov, which was elected local councils with the resp. for collecting taxes, building projects, levying rates? o Trial by jury (in public) was introduced / censorship lessened o Town councils were established (1870) o The army was reformed (conscription for all classes ? 1870), service time was reduced, and training and education facilities were improved. o The national budget became subject to audit and transparency / a state bank was established. (transparency was not extended to the national gov. and the Czar remained an autocrat) o Social protest: o The Populist (mainly students and intellectuals) / in 1866 a student attempted to assassinate the Czar ? ...read more.

* The Czar made no move towards political change * The army remained loyal / this was not to be in 1917 * The Duma only had limited power (couldn?t initiate constitutional change / could be suspended by the Czar) * The Duma was not fully democratic * The creation of the Duma split the opposition: Constitutional Democrats (wanted full constitutional gov.) vs. Octobrists (satisfied w/ the October Manifesto) Peter Stolypin (1906-11) (Prime Minister) o Abolished payments by peasants for their gain in land from the nobles o Introduced low interest loans for peasants (so they could buy land) o Tried to establish a middle class of peasants loyal to the Czar o Firm against non-parliamentary opposition o Assassinated in Sept. 1911 The Russian Revolutions of 1917 Reasons for Rev. of March 1917: o Defeat of Russia following entry in WWI o Some argue that Rev. was inevitable regardless of WWI (terrible living standards) o Incompetence of the Czar o Corrupt and inefficient Gov. o Weak ruler (Nicholas II) o Rasputin damage the reputation of the royal family in the eyes of other nobles (he was seen to be the de facto ruler of the country) o Food shortages o Army losses in 1916 (the army morale declined) ...read more.

The establishment of a single party rule: o Lenin dissolved the Constituent Assembly (which did not have a Bolshevik majority). o Dictatorial methods before this had included: suppression of newspapers, banning of the Cadet Party, setting up a secret police (Cheka). o The communist aimed to "suppress all attempts of the bourgeoisie to return to power: and this is what is meant by the dictatorship of the proletariat." o Lenin drew up a new constitution after dissolving the assembly. Lenin?s Constitution: o Drawn up in 1918 but only accepted w/ adjustments in 1922 & 1924. o See notes for further info on basic rights, voting rights, etc. The ending of the war: Lenin wanted to obtain peace and signed in March 1918 the Treaty of Brest-Litovsk: o Russia lost Poland, Finland, Estonia, Lithuania, Latvia, the Ukraine, part of Belorussia and Transcaucasia. (1,3 million sq. miles of territory, a pop. of 62 million people, 1/3 of all her railways, _ of her coal and iron resources.) Advantages: o Bolsheviks did not have to deal w/ discontented minorities. o Bolsheviks could concentrate on control of Russia itself o End of war meant Lenin could concentrate on internal difficulties. The treaty was unpopular, the German ambassador was assassinated, and attempts to assassinate Lenin were made. ...read more.