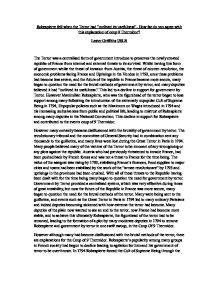 Robespierre fell when the Terror had outlived its usefulness- How far do you agree with this explanation of coup 9 Thermidor?

Robespierre fell when the Terror had "outlived its usefulness"- How far do you agree with this explanation of coup 9 Thermidor? Lester Griffiths U6LB The Terror was a centralised form of government introduce to preserves the newly created republic of France from internal and external threats to its survival. Whilst having this form of government whilst the threat of invasion from Austria, the threat of counter-revolution, the economic problems facing France and Uprisings in the Vendee in 1793, once these problems had become less severe, and the future of the republic in France became more secure, many began to question the need for the brutal methods of government by terror, and many deputies believed it had "outlived its usefulness." This led to a decline in support for government by Terror. However Maximilian Robespierre, who was the figurehead of the terror began to lose support among many following the introduction of the extremely unpopular Cult of Supreme Being in 1794, Unpopular policies such as the Maximum on Wages introduced in 1794 and his increasing reclusiveness from public and political life, leading to mistrust of Robespierre among many deputies in the National Convention. ...read more.

be removed, leading to the formation of a plot by many moderate deputies in 1794 to remove Robespierre and government by terror in one swift swoop, in the Coup Of 9 Thermidor. However although many had become disillusioned with the brutal methods of the terror, there are explanations for the Coup of 9 Thermidor. Robespierre's popularity among many groups in French society had begun to decline leading to agitation for him and his government of terror to be overthrown. In 1794 Robespierre forced the Cult of Supreme Being through the Committee of Public Safety. This was deeply resented by Catholics across France as they felt Robespierre was trying to introduce a new religion to France and completely oust Christianity. The Cult of Supreme Being was also deeply mistrusted by many deputies who believed Robespierre was trying to become an absolute ruler of France. Robespierre also began to lose support among the very group who helped him and the Jacobins ascend to power, the Sans-Culottes. Following the great terror in Paris, Hebert and Danton, two extremely popular figures among the Sans-Culottes were guillotined on Robespierre's orders. ...read more.