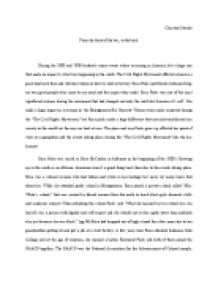 ﻿Christina Steinke From the front of the bus, to the back During the 1800 and 1900 hundreds many events where occurring in America, but a huge one that made an impact is what was happening in the south. The Civil Rights Movement affected America a great deal back then and still does today on how we look at history. Rosa Parks and Martin Lutheran King are two great people who come to my mind and the impact they made. Rosa Parks was one of the most significant women, during the movement that had changed not only the south but America it?s self. She made a huge impact as a woman in the Montgomery Bus Boycott. Women were rarely respected during the ?The Civil Rights Movement,? but Rosa parks made a huge difference that not only transformed our society in the world but the way we look at race. The place and way Parks grew up, affected her point of view on segregation and the events taking place during the ?The Civil Rights Movement? like the bus boycott. Rosa Parks was raised as Rosa McCauley in Alabama in the beginning of the 1900?s.Growing up in the south as an African- American wasn?t a good thing back then due to the events taking place. ...read more.

When colored people got on the bus they were asked to pay and then get off the bus and walk to the back to get back on. In some events the bus drivers would drive off and leave the colored after paying already before giving them a chance to get back onto the bus. If an incident was to happen, the buy drivers were given the powers of a police officer of the city to take act upon the action. Rosa parks on the other hand did not believe this was even fair due to the ways she was raised and the experiences and facts she had from the NAACP. With Rosa and the information she knew made a huge impact on a cold winter day that would forever change her life. ?Shortly after five o?clock, a bus at pulled up to the stop. Absorbed in thought about NAACP workshop Parks had been planning for that weekend.? (Olson, 107) Parks didn?t notice the driver until after she had paid and got on board. This was the same driver who twelve years ago kicked her off the bus before. ...read more.

The result of the boycott was the blacks had ended segregation on buses and they proved to themselves and others that they had the economic power to make a difference. This strike had also given a rise to Martin Luther King who are the only black leader to unite the blacks. Parks had been educated and followed for a decade with the NAACP as an activist and with her choice on the bus system on the cold winter day it acknowledged for that right to take a stand on what she believed in. Students today can learn how to participate in groups on race and to communicate with people, they also can learn to not judge a person based on skin color. Parks has made a huge influence in not just the south but America in general. Women were not a huge deal back in the 1800 and 1900s hundreds until few of the women like Rosa Parks and Diane Nash spoke up on how they felt. Together, I think we can agree on how strong of a person this woman was and how much influence she gives to others still today. ...read more.