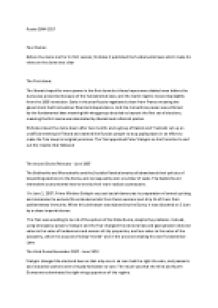 ﻿Russia 1904-1917 Four Dumas Before the duma met for its first session, Nicholas II published the fundamental laws which made his views on the duma very clear The First duma: The liberals hoped for more power in the first duma but these hopes were dashed even before the duma was presented because of the fundamental laws, and the tsarist regime recovering slightly from the 1905 revolution. Early in the year Russia negotiated a loan from France meaning the government had tremendous financial independence. And the monarchies power was enforced by the fundamental laws meaning left-wing groups decided to boycott the first set of elections, meaning the first duma was dominated by liberals and reformist parties. ...read more.

When this ultimatum was rejected by the Duma, it was dissolved on 3 June by a ukase imperial decree The Tsar was unwilling to be rid of the system of the State Duma, despite the problems. Instead, using emergency powers, Stolypin and the Tsar changed the electoral law and gave greater electoral value to the votes of landowners and owners of city properties, and less value to the votes of the peasantry, whom he accused of being "misled" and in the process breaking his own Fundamental Laws The third Duma November 1907 - June 1912 Stolypin changed the electoral laws so that only one in six men had the right the vote, and peasants and industrial workers were virtually forbidden to vote. ...read more.

elected. Soon after the outbreak of the First World War the Duma voted to support Nicholas II and his government. When the Bolshevik deputies voted against the government on this issue, they were arrested, had their property confiscated and sent to Siberia. Members of the Duma, including its leader, Michael Rodzianko, became increasingly critical of the way Nicholas II was managing the war. In 1916 Rodzianko tried to persuade the government to introduce reforms and to appoint a Duma government. In February, 1917, he sent a series of telegrams explaining the dangers of revolution. After the Tsar's abdication in March, 1917, Michael Rodzianko, helped form the Provisional Government led by George Lvov. The Duma was closed down after the Bolshevik Revolution in October, 1917 ...read more.