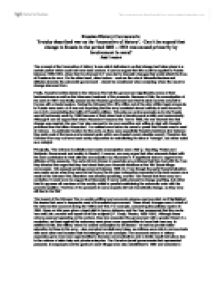 Russia and its Locomotive of History

Russian History Coursework: Trotsky described war as the 'locomotive of history'. Can it be argued that change in Russia in the period 1855 - 1954 was caused primarily by involvement in wars? Jess Lawson The concept of the 'locomotive of history' is one which indicates to us that change had taken place in a certain period which could not have been undone. It can be argued that this could be applied to Russia between 1855-1954, when their involvement in 7 wars led to dramatic changes that would affect the lives of Russians for ever. On the other hand, other factors - such as the role of influential leaders and attitudes towards the autocratic government - should be considered when analysing where the need for change stemmed from. Firstly, Russia's terrible defeat in the Crimean War left the government significantly aware of their backwardness as well as the inhumane treatment of the peasants. Because of this, the emancipation of the serfs in 1861 was finally passed as the Russian government saw that its state was the only left in Europe with a feudal system. During the Crimean War, fifty million out of the sixty million legal occupants in Russia were serfs: so it was not surprising that the army consisted almost entirely of serfs forced to serve in it, exacerbating the frailty of Russia's military. This acts as a prime example as to why Russia was left extremely weak by 1856 because of their sheer lack of development socially and economically. Although it can be argued that when Alexander II became the Tsar in 1855, the war showed him that change was needed, the new Tsar also seemed to be more sensitive and willing to deal with Russia's problems than his father Alexander I. He realised even before he came to power that Russia was in need of reforms -- in particular freedom for the serfs, as they were essentially Russia's backbone (for instance they paid most of the taxes and produced grain which was Russia's most valuable export). ...read more.

What is also significant about the Revolution is that pre-1905 strikes and demonstrations had taken place primarily for economic protests -- 1905 saw hundreds of thousands of civilians protesting for political rights. In 1904, Russia's Minister of Interior named Plehve was assassinated by terrorists as people believed that he should be blamed for the war with Japan. The result of this was that Nicholas II decided to lift some restrictions on the Zemstva to satisfy his people: but this simply increased public meetings and discussions through the press. Therefore the pressure on the Tsar for reform grew, and this could be a reason other than the war as to why tensions in Russia intensified. Although it could be said that the extension of press freedom and 'Russification' - whereby Tsar Nicholas II carried on Alexander III's policy to impose Russian ways on everyone within the nation - assisted the cause of the 1905 Revolution, the event that initiated it was later to be known as b****y Sunday. The march in St. Petersburg resulted in palace guards firing on the protestors, killing 200 and injuring 100s more. Although Nicholas II was not present at the b****y scene, the event caused an even greater change to Russia in the year that had led on from the Russian war. Father Georgy Gapon who led the march cried: 'There is no God any longer. There is no Tsar' [M. Lynch; 'Reaction and Revolution: Russia 1894-1942']. The Russo-Japanese War witnessed a great increase in freedom of speech: what began as 5 men demanding to be reinstated to the factory in which they were fired from concluded with 105,000 workers throughout the city marching on the Winter Palace. b****y Sunday aided in escalating hatred towards the Tsarist regime as social unrest continued due to Russia's backwardness, particularly in agriculture. Afraid that the revolution may spiral out of control, Nicholas - against his wishes - was advised by his government to concede a constitution. ...read more.

The war both caused a setback to Russia's plans yet at the same time changed it somewhat for the better. The pact was broken in 1941 due to Operation Barbarossa, and F.Y.P.s were destroyed when it lost some of its industrial infrastructure when the German army invaded. Despite this, Russia was still considered to emerge as one of the world's major industrial powers by the end of the Second World War. After Stalin's death in 1953, there was a widespread concern that the state could not survive without him as there was a barrier of ideological differences left between East and West Russia. Nikita Khrushchev, the general secretary of the Communist Party, denounced Stalin in 1956 when he claimed that 'It is...a bad thing that Stalin launched into deviations and mistakes, which harmed our cause' [D. Murphy; 'Russia 1855-1964']. This added to the tension and fear among the German people. At the same time, the Second World War caused tensions between Russia and the USA, as Russia felt that the Americans wanted most of the fighting to take place in Russia so that they would be left weaker at the end of it. I believe that the distrust in the USA and Britain from the Second World War contributed to Russia's involvement in the Cold War by 1948; however the the dislike of Khrushchev who would create the 1955 Warsaw Pact treaty between communist states triggered it. By analysing Russia between the period 1855-1954, it is clear to see that for each war that they became involved in, a particular form of change took place: some dramatic and permanent such as the abdication of the Tsar; some which only seemed to be a change on the surface such as the emancipation of the serfs. One could say that Russia's character and structure of society was tested in many aspects. However, I feel that although a significant factor, war was not the main factor that triggered change because in most cases, it simply entrenched the need for changes that were already present in Russia. ...read more.