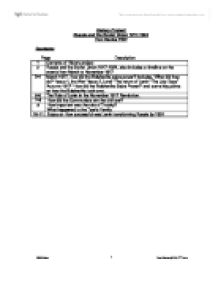 History Project: Russia and the Soviet Union 1917-1924 Tom Davies FGH Contents: Page Description 1 Contents of History project 2 Russia and the Soviet Union 1917-1924, also includes a timeline on the events from March to November 1917 3-4 March 1917, How did the Bolsheviks seize power? Includes, 'What did they do?' 'Issue 1, the War' 'Issue 2, Land' 'The return of Lenin' 'The July Days' 'Autumn 1917' 'How did the Bolsheviks Seize Power?' and some key points on how the Bolsheviks took over. 5-6 The Role of Lenin in the November 1917 Revolution. 7-8 How did the Communists win the civil war? 9 How important was the role of Trotsky? What happened to the Tsar's Family 10-11 Essay on How successful was Lenin transforming Russia by 1924 Russia and the Soviet Union1917-1924 1. The March revolution of 1917: * The Tsar abdicates on the 20th March, in favour of his brother Michael because his son Alexis was too young. * However, the people had other ideas, they wanted a change in government. 2. The provisional Government: * The crowds gathered outside the Tauride Palace Demanding that the Duma took charge of the country. * A temporary government was formed to rule the country until an election could be held to decide who and how the country would be run. 3. Soviets * AS the provisional government was taking way, another group was starting up, the Petrograd Soviet. People sent representatives to sort out their interests. * The first thing that the soviet did was to issue order 1, which gave it control of the armed forces in Petrograd. How did the Bolsheviks seize power? March 1917 Provisional Government + Petrograd Soviet Control Russia 1. ...read more.

Anybody who spoke out against the government was arrested, and many were shot with out t trail. Sometimes it was enough to be someone who might oppose the Bolsheviks. The use of terror to control people was to become a feature of the new regime. Constituent Assembly * By November 1917, Lenin had been forced into holding elections promised by the provisional government. * Railway workers said that the would shut down the railways if Lenin did not go ahead with Russia's first free elections. * These were to choose a constitunal Assembly, which would work out how Russia would be governed in the future. Peace * Lenin sent Trotsky to meet the Germans to negotiate a peace treaty. * Trotsky walked out of the talks because the Germans demanded so much territory. * He stated that there would be 'No Peace, No war' * However, Lenin sent him back, he was sure that the Bolsheviks would stay in Power only if the war could be ended quickly. * The result was the harsh treaty of Brest-Litovsk in March 1918 How did the communists win the civil war? There were three sides to the civil war, but two main ones. The reds and the whites. The Reds: The Bolsheviks or Communists (Red was the colour of Communism). The Whites: All the opponents of the Bolsheviks -tsarists and nobles, middle-class constitutional democrats, Mensheviks and Socialist Revolutionaries. The whites got their name from the white uniforms worn by the Tsarist officers. This meant that the Whites were always associated with the Tsar and the old system of government. The Greens: Independent groups of nationalists, peasants or bandits who roamed Russia at this time. ...read more.

He obviously succeeded in bringing light bulbs and more electricity to Russia, but after his death. The NEP encouraged foreign countries, which had refused too trade with Soviet Russia before 1921, to resume trade links. Western countries hoped that the move back to private trade and profit - capitalism - meant the failure of Communist ideas. In 1921 an Anglo Soviet trade agreement marked the beginning of increased trade with the West, which gave a great boost to the Soviet economy. There were large-scale exchanges of Western industrial goods for Russian oil and similar products. The NEP Lasted until 19128 and Russia generally became more prosperous. Some of this can be pit down to the period of stability, which followed seven years of war and civil war from 1914 to 1921. But the NEP undoubtedly played a big role in improving the general economic situation. We know that between 1921 and 1928 the Agricultural and industrial production had risen considerable. But infact all that had happened was it had returned back to where it was in 1917; Lenin had not really made a big impact on the way Russia worked. After the civil war, Living conditions were still appalling, peasants hauled for their food, had no proper lighting, food was dreadful and had no washing facilities. Lenin failed to stop Stalin becoming a leader, as well as spread communism out of Russia. Yes, Agricultural and Industrial production had risen from 1921-1928, but there were only back where they had started. Lenin had not made any difference except get them back to where they started. Levels rose, yes, but only in relation with 1917, not prior to war levels, also, Stalin's 5 year plans showed us that much actually did need to be done, in terms of industry and agriculture progressed but only took Russia back to pre-war levels. history project.doc 1 Tom Davies (FGH) 4th Form ...read more.