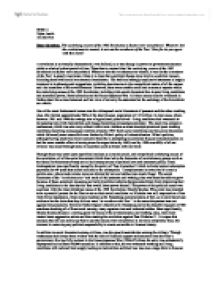 Petersburg carried pictures of him, so it could have been evidence for the claim that they did not want "to overthrow the Tsar" in the sense the protest was not against him personally. However Father Gapon's March at St. Petersburg led to the dreadful massacre of 500 marchers shocking all of Russia and causing many agrarian riots and industrial strikes. Most significantly, Bloody Sunday became a turning point for many of the revolutionaries and working class, were more wanted more aggressive action and thus starting the revolution against Tsar Nicholas II. It is upon this analysis that one can safely say that to say that causes were not political is not only completely false, but immoral in removing any political responsibility in events so terrible in Russian history. In addition to social discontent among civilians, was the great dissatisfaction among the military. Though weaknesses had always been evident with the lack of financial support and structure from the Tsar's government, this was fully realised in the Russo-Japanese War (1904-05) where the army was substantially unprepared and suffered 50,000 casualties. In addition to this, the war worsened working and living conditions with reduced food supply leading to malnutrition and their loss was also a large blow to Russian nationalism and pride as a great power. ...read more.

Whatever else the revolutionaries wanted, it was not the overthrow of the Tsar' should always be greatly emphasized. This is for obtaining true accounts of the events themselves and to do so in the awareness of the existence of historical narratives which aim to wrongly alter historical events with intentions to form desired perceptions of certain figures and events for their own benefit. This has been previously evident in Russian history textbooks, memoirs and historical literature which could very well contain similar claims. It is then key in this particular instance that one limitedly appreciates , that although all underlying (and immediate) causes were essentially political, they did contain key social or economic elements that the claim unfortunately overstates ;such as social discontent due to autocratic policies and military dissatisfaction due to the weak management by the government. These were 'brought to the surface' by the triggering events Bloody Sunday and the Russo-Japanese War respectively. The second part of the claim, does have minor merits in acknowledging that the desire for the Tsar to be overthrown was not universal, however makes the crucial error in generalizing this to all of the 1905 revolutionaries, where the much more numerous and effective Social Revolutionary Party, Bolsheviks and Mensheviks clearly intended to overthrow the Tsar. One is therefore justified in disagreeing with the claim to a very great, even complete extent. ...read more.