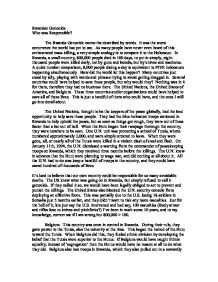 Rwandan Genocide - Who was Responsible?

Rwandan Genocide Who was Responsible? The Rwanda Genocide cannot be described by words. It was the worst occurrence the world has yet to see. As many people have never even heard of this orchestrated mass killing, a very simple analogy is to compare it to the Holocaust. In Rwanda, a small country, 800,000 people died in 100 days, to put in simply, eight-thousand people were killed daily, not by guns and bombs, but by knives and machetes. A quick number comparison, 8,000 people dieing a day is equivalent to FIVE holocausts happening simultaneously. How did the world let this happen? Many countries just stood by idly, playing with words and phrases trying to avoid getting dragged in. Several countries could have helped to save these people, but why would they? ...read more.

On January 11th, 1994, the U.N. dismissed a warning from the commander of peacekeeping troops on Rwanda, which they received three months before the killings. The U.N. knew in advance that the Hutu were planning to wage war, and did nothing at all about it. All the U.N. had to do was keep a handful of troops in the country, and they could have saved hundred of thousands of lives. It's hard to believe that our own country could be responsible for so many avoidable deaths. The US knew what was going on in Rwanda, but simply refused to call it genocide. If they called it so, we would have been legally obliged to act to prevent and punish the killings. The United States also blocked the U.N. security console from deploying an effective force. ...read more.

Belgium also had troops in Rwanda, which they also pulled out in a cowardly manor when things got too rough. If Belgium would have kept the few soldiers they had in the country to begin with, I am confident they could have saved thousands and thousands of lives, and the Hutu never did attack when an armed military was present at the time. It is plain to see that many countries were to blame for the incidents that occurred in Rwanda. If one country would have stepped up, thousands of lives could have been saved. Instead, the United states, the United Nations, and Belgium all ignored what was going on, seeming to turn a blind eye. They didn't believe that Rwanda was their responsibility. These three countries could have saved thousands of innocent lives by just sending a handful of troops, maybe even as few as 500 each. Instead, they called the genocide a breakdown in the cease-fire. These acts of not responding are inexcusable. ...read more.