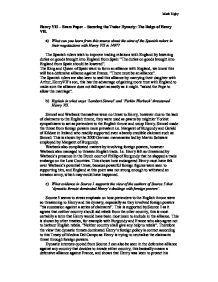 Securing the Tudor Dynasty: The Reign of Henry VII.

Henry VII - Exam Paper - Securing the Tudor Dynasty: The Reign of Henry VII. a) What can you learn from this source about the aims of the Spanish rulers in their negotiations with Henry VII in 1497? The Spanish rulers wish to improve trading relations with England by lowering duties on goods brought into England from Spain "The duties on goods brought into England from Spain should be lowered". The King and Queen of Spain want to form an alliance with England, we know this will be a defensive alliance against France. "There must be an alliance". The Spanish rulers are also keen to seal this alliance by marrying their daughter with Arthur, HenryVII's son, this has the advantage of gaining more trust with England to make sure the alliance does not fall apart as easily as it might. "asked the Pope to allow the marriage". b) Explain in what ways 'Lambert Simnel' and 'Perkin Warbeck' threatened Henry VII. Simnel and Warbeck themselves were no threat to Henry, however due to the lack of claimants to the English throne, they were used as pawns by mightier Yorkist sympathisers to act as pretenders to the English throne and usurp Henry. Simnel made the threat from foreign powers more prevalent i.e. Margaret of Burgundy and Gerald of Kildare in Ireland who readily supported even a barely credible claimant such as Simnel. ...read more.

The main reason for why Henry was able to secure his throne was his own domestic policy that ensured the obedience of his followers in particular the Nobles, who were needed to enforce Henry's power into the localities. Foreign policy took second priority to this, especially at the start of his reign, so can only seen to be a contributory factor for Henry to secure the throne. However factors such as Henry's network of agents and his financial security cannot be overlooked when considering the way in which Henry VII secured his throne. Henry's diplomatic skills created valuable alliances with foreign powers, that reduced the threat from pretenders that plagued Henry's aim to gain total stability especially in the early part of his reign i.e. pre 1499. For example the Truce of Etaples in 1492 was negotiated with France, and consequently France could no longer harbour English rebels. This is very significant as Perkin Warbeck had to flee France and therefore Henry reduced the threat from Warbeck to his throne by using foreign support. The alliance with Spain also showed that foreign support for Henry was instrumental in diminishing the threat from pretenders. This is because remaining on good terms with one of the super powers in Europe means that they are less likely to support claimants to Henry's throne, Henry clearly saw the advantages of this and readily made good relations with Spain. ...read more.

Henry's network of agents were employed to hunt out any possible traitors among the Henry's court of nobles and officials. They are responsible for exposing plots and traitors that threatened the security of Henry's throne. For example from source 5 it shows their importance "He relied on a network of agents and informers". This is clearly shown when they exposed Sir William Stanley as involved in a plot with Perkin Warbeck, he was duely executed. Also Henry's agents were responsible for the failure of Warbeck's landing at Deale. They are obviously an important aspect of Henry's tactic to avoid being usurped and to secure the obedience of his followers and therefore securing his throne. Henry's foreign policy was realistic it offered the opportunity for Henry to use alliances with continental powers to reduce the threat from claimants to his throne. However the ever-changing foreign climate, especially after the death of Arthur (1502) and Isabella (1504) showed how foreign support was too volatile to rely on, and the disadvantages from foreign support when it was not in Henry's favour were all to clear to see, and the stability of Henry's throne must have been under pressure. This is why it was crucial that Henry kept the support of his followers especially the nobles. Methods such as attainders etc and the close scrutiny from Henry's agents kept his nobles in check and made sure that no claimant or rebellion could substantiate into a large attack on Henrician England, because any threat needed noble support to give their uprising sufficient numbers. Mark Rigby ...read more.