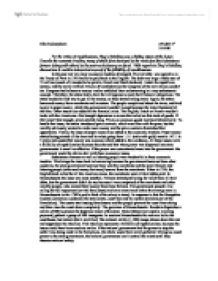 Olha Kolesnykova APUSH-3rd 10-8-08 For the critics of republicanism, Shay's Rebellion was a chilling vision of the future. Describe the economic troubles, many of which first developed in the revolution that subsistence farmers (along with others) in the post-revolutionary era faced. With regards to Shay's Rebellion, discuss how it could be interpreted as proof of the fallibility of republicanism. In the post war era many economic troubles developed. The war debt- was agreed to in the Treaty of Paris in 1783 had to be paid back to the English. The debt was large a hefty sum of 35 million (much of it needed to be paid to French and Dutch bankers). Under the republican system, and the newly ratified Articles of Confederation the Congress of the new nation couldn't tax. ...read more.

To handle that issue, the states introduced price controls, which were fine with the poor, but the wealthy obviously wanted to make more money and the price controls diminished that opportunity. Finally, the issue of paper money also added to the economic troubles. Paper money started being printed all the time and its value going from 1.5:1 (ratio with gold) went to 147:1 in 5 years and counterfeit money was common which added to the confusion. All these issues were a fallibility of republicanism because they showed that when power was dispersed into state governments it wasn't as effective. If the power was concentrated more into the government- the government would be able to deal with these economic issues. ...read more.

The courts start issuing foreclosures and the people prevent the court from sitting and then close the court down completely. The governor of Massachusetts- Bowdain dispatches a militia of 600 to protect the Supreme Court of the state. Daniel Shays (war captain- awaiting payment) gathers a group of 500 insurgents. In western Massachusetts the men are led to the courthouse, but retreat after 4 are killed. The national militia (1,300) troops chases down the rest and suppresses the rebellion. This rebellion represents a fallibility of republicanism, because the issues could have been resolves earlier. If the national government had the power to stop the unfair laws being made in the first places, the rebels would have never gathered. Giving too much power to the state government, the national government can't control the events until they threaten national safety. ...read more.