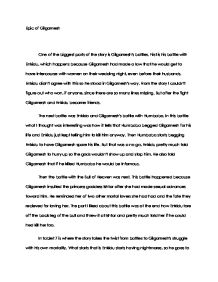 Short description of Epic of Gilgamesh

Epic of Gilgamesh One of the biggest parts of the story is Gilgamesh's battles. First is his battle with Enkidu, which happens because Gilgamesh had made a law that he would get to have intercourse with women on their wedding night, even before their husbands. Enkidu didn't agree with this so he stood in Gilgamesh's way. From the story I couldn't figure out who won, if anyone, since there are so many lines missing. But after the fight Gilgamesh and Enkidu became friends. The next battle was Enkido and Gilgamesh's battle with Humbaba. In this battle what I thought was interesting was how it tells that Humbaba begged Gilgamesh for his life and Enkidu just kept telling him to kill him anyway. Then Humbaba starts begging Enkidu to have Gilgamesh spare his life. ...read more.

Enkidu suffers for twelve days then finally dies. This makes Gilgamesh realize that his own death is inevitible. The next tablet seems to be all about Gilgamesh mourning his lost friend and building a monument in his honor. The rest of the poem is about how Gilgamesh deals with the reality of death, or rather how he doesn't deal. Tells of how he didn't bathe, shave, or take care of himself in anyway. Gilgamesh then decides that he can't live unless he can have eternal life, so he journeys to a man named Utnapishtim (and for obvious reasons I'm gonna call him "Ut" for the rest of my paper) who he believes can grant him eternal life. After his long journey he finally reaches "Ut" and "Ut" explains to him how he became immortal. ...read more.

Okay, my take on the man Gilgamesh is that he was pretty much a moron, in a sense. Everything that went wrong in his life he created. There were so many situations if he had done one thing different the whole outcome of the story would have changed. The fact that Gilgamesh was a strong, god fearing man was brought to your attention more than once in this story. The story showed how important the gods were in everything the Mesopatamians did. Also, I liked how it told of the gods pretty much feeling bad for flooding the earth and trying to wipe out humanity. Makes it easier to understand the Mesopatamians belief that their gods where so human-like and that even gods make mistakes. I think the reason this story has been kept alive for so long is because Gilgamesh is like everyone always going through something not always making the right decisions and paying for it in the end. The story is old as time but ageless. ...read more.