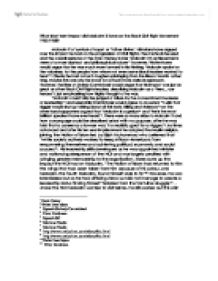 What short term impact did Malcolm X have on the Black Civil Right Movement 1965-1968? Malcolm X a 'symbol of hope' or 'father divine'. Historians have argued over the impact he had on the progression of Civil Rights, the methods he used and the overall persona of the man; Verney states "Malcolm X's achievements were of a more abstract and philosophical nature"1 however, Walter Myers would argue that he was much more forward in his thinking "Malcolm spoke for the voiceless, for the people from whom not even some black leaders wanted to hear"2. Clearly he had a much tougher upbringing than the likes of Martin Luther King, maybe this was why he stood for a much more radical approach. However, the likes of Stokely Carmichael would argue that his impact was just as great as other Black Civil Rights leaders, describing Malcolm as a "hero...-our heroes"3, just emphasising how highly thought of he was. "Malcolm could fairly be judged a failure by the conventional measures of leadership"4 and essentially Carmichael would agree to an extent "I wish that n****r would shut up talking about all this hate, killing and violence"5 on the other hand supporters argued that "Malcolm is a genius"6 and "he is the most brilliant speaker I have ever heard"7. ...read more.

Malcolm was perceived in his lifetime as a demonic presence at the edges of out field of sight-an angel of our darkness contending with the angels of light for possession of the black soul"27. Goldman goes on to say that "it was King who occupied centre stage". It was because of Malcolm's radical ways and less conventional methods which caused tension amongst the white population, where as King would take a more reserved approach. This is highlighted by Manning Marable as Malcolm states "every white man in America, when he looks into a black mans eyes, should fall to his knees and say 'I'm sorry, I'm sorry-my kind has committed history's greatest crime against your kind; will you give me the chance to atone?'"28 On the other hand King adopted 'turn-the-other-cheek' policy. The Organisation of Afro-American Unity Malcolm created had limited impact on the movement. They attempted "like Dubois before him... to submit a list of human rights violations and acts of genocide against U.S. blacks to the United Nations"29. In addition he later brought about the idea of 'rifle clubs' to defend blacks against brutality and as Fairclough argues "Malcolm insisted that violence had to be central to black liberation"30 furthermore, 'he did not believe in passive resistance' and "every n***o ought to have a weapon in his house... ...read more.