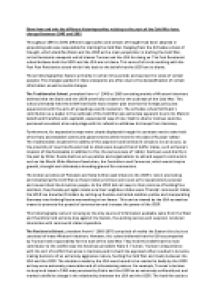 ﻿Show how and why the different historiographies relating to the start of the Cold War have changed between 1945 and 1991 Throughout 1945 to 1991 different approaches and schools of thought had been adopted in pinpointing who was responsible for starting the Cold War. Ranging from the Orthodox school of thought, which identifies Stalin and the USSR as the main perpetrator in starting the Cold War, to the Revisionist viewpoint which blames Truman and the USA for doing so. The Post Revisionist school believes both the USSR and the USA are to blame. This comes full circle resulting with the Post Post Revisionist school which links back to the belief that the USSR are to blame. These historiographies feature primarily in certain time periods and express the views of certain peoples. The changes sparked in these viewpoints are often due to the declassification of certain information as well as social changes. The Traditionalist School, prevalent form +/- 1945 to 1960 consisting mainly of Western historians believed that the Stalin and the USSR were fully to blame for the outbreak of the Cold War. This school ultimately held the belief that Stalin had a master plan and that his foreign policy was expansionist with the aims of spreading a world revolution. ...read more.

The Revisionist School, prevalent from+/- 1960-1970 comprised of mainly the Eastern bloc but too consisted of many Western historians. However, this school believed that the USA accompanied by Truman held responsibility for the start of the Cold War. They held the belief that the main contributor to the conflict was the American president Harry S. Truman. Truman?s inexperience with the sort of conflict that arose in Germany and his hard line approach often resulted in America making decisions of an extremely aggressive nature, fuelling the Cold War and rivalry between the USA and the USSR. The decisions made by the USA were bound to be reacted to badly by the USSR as they were extremely provocative and of a threatening nature. For example, Truman?s decision to stop lend lease in 1945 was perceived by Stalin and the USSR as an extremely unfriendly act and marked a definite change in the relationship between the USA and the USSR. The hard-line actions adopted by the USA and encouraged by the Keenan Long Telegram contributed to the Cold War as they acted as a declaration stating that the USSR and the USA could not work together or even coincide peacefully, this approach too offered more reason for an opposing Soviet reaction. ...read more.

The blame has to be placed on both the USA and the USSR as there was mutual mistrust between them; this mistrust did not arise specifically due to one event with one party being in the wrong but was cultivated for many years between each party and exacerbated by their opposing ideologies and added fuel to by both their opposing participation in the Cuban Missile Crisis and in Afghanistan. Therefore the vacuum left by Germany was bound to inspire conflict, as with any two major superpowers the problem of power and power struggles were bound to be introduced. The misunderstanding of motives, stemming from the mistrust of each party too played a main role in the development of the Cold War as actions often of defensive purposes were seen as in favour of their own regime and threatening to the other. The joint responsibility is supported by the fact that both the German Federal Republic and the German Democratic Republic mutually refused to acknowledge the other as a proper government. This change in interpretation comes about as a result of Stalin’s death, the period of détente and the reinterpretation of old information as more archives are opened and information is declassified. ...read more.