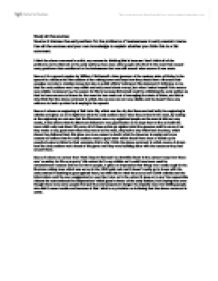 Source G blames the early settlers for the problems of lawlessness in early western towns. Use all the sources and your own knowledge to explain whether you think this is a fair comment.

Study all the sources Source G blames the early settlers for the problems of lawlessness in early western towns. Use all the sources and your own knowledge to explain whether you think this is a fair comment. I think the above comment is unfair, my reasons for thinking this is because I don't think all of the problems can be blamed on the early settlers, there were other people who lived in the west that caused many problems that contributed to the lawlessness that was still around when source G was wrote. Source G is a speech spoken by William J McConnell a later governor of the western state of Idaho, in the speech he criticises the first settlers of the mining towns ...read more.

Source A shows an engraving of Salt Lake City which was the city the Mormons had built, the engraving is reliable and gives us an in sight into what the early settlers done when they arrived in the west, by looking at the engraving we can see that the Mormons were very organised people as the town is laid out very neatly, it also shows that the Mormons followed a very good leader as he kept them in line to build the town which only took them 25 years, all of these points go against what the governor said in source G as they made a very good start when they moved to the west, they built a city which had churches, which shows ...read more.

things were really rough in the Montana mining town which was set up in the 1862 gold rush and it doesn't really go in favour with the early settlers if anything it goes against them, but with this in mind the source isn't 100% reliable and the information could be over exaggerated or even lies. Later on in the extract it goes on to say 'the respectable citizens far outnumbered the desperadoes' which goes in favour of the early settlers, its is saying that even though there were some people that put lives and property in danger the majority were law abiding people who didn't cause trouble and because of this I stick to my decision on believing that the above comment is unfair. ...read more.