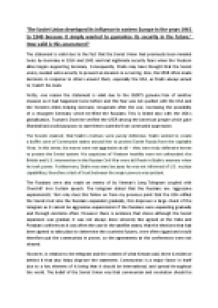 ﻿?The Soviet Union developed its influence in eastern Europe in the years 1945 to 1949 because it simply wanted to guarantee its security in the future.? How valid is this assessment? The statement is valid due to the fact that the Soviet Union had previously been invaded twice by Germany in 1914 and 1941 and had legitimate security fears when the Western allies began supporting Germany. Consequently, Stalin may have thought that the Soviet union, needed extra security to prevent an invasion re occurring. Also, the USSR often made decisions in response to others around them, especially the USA, as Stalin always aimed to ?match? his rivals. Firstly, one reason the statement is valid due to the USSR?S genuine fear of another invasion as it had happened twice before and this fear was not quelled with the USA and the Western Allies helping Germany recuperate after the war, increasing the possibility of a resurgent Germany which terrified the Russians. ...read more.

Not only does this follow on from my previous point that the USA vilified the Soviets but also the Russians expanded gradually, this disproves a large chunk of the telegram as it cannot be aggressive expansionism if the Russians were expanding gradually and through elections often. However there is evidence that shows although the Soviet expansion was gradual, it was not always done sincerely like agreed at the Yalta and Potsdam conferences it was often the case in the satellite states, that the elections that had been agreed to take place to determine the countries futures, were often rigged and would therefore put the communists in power, so the agreements at the conferences were not obeyed. However, in relation to the telegram and the content of what Kennan said, there is evidence behind it that also helps disprove the statement. Communism is a major factor in itself due to a key element of it being that it should be international, and spread throughout the world. ...read more.

Britain and the USA, ultimately though that Stalin was exploiting the weaknesses of vulnerable Eastern European countries, aswell as exaggerating the use of the Soviet Union?s buffer zone. To the western world, this looked as if it were the beginning of serious Soviet aggressions, therefore naturally the Western powers were feeling defensive, and wary of Stalin?s plots. In conclusion, I believe the statement that the Soviet Union only expanded into Eastern Europe for security reasons is valid. Although the western powers believed that Stalin was over utilising a ?buffer zone? as an excuse, to continue to dominate Eastern Europe, in my opinion, Stalin was seriously concerned about another Western invasion, and he felt more secure with other Soviet occupied Eastern European countries surrounding the USSR. Although Stalin may have expanded too much, and consequently made the western countries feel defensive, I believe that Stalin was mainly concerned about security and paranoia may have led to the worries of Britain and the USA in particular. ...read more.