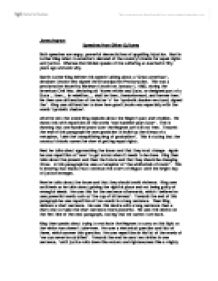 Speeches from Other Cultures

James Ingram Speeches from Other Cultures Both speeches are angry, powerful denunciations of appalling injustice. Martin Luther King refers to America's demand of the country's blacks for equal rights and justice. Whereas Elei Weisel speaks of the suffering at Auschwitz fifty years ago and asks why. Martin Luther King delivers his speech talking about a 'Great American', Abraham Lincoln who signed the Emancipation Proclamation. This was a proclamation issued by Abraham Lincoln on January 1, 1863, during the American Civil War, declaring all 'slaves within any State, or designed part of a State ... then ... in rebellion, ... shall be then, thenceforward, and forever free.' He then uses alliteration of the letter 's' for 'symbolic shadow we stand, signed the'. King uses alliteration to show how good Lincoln was especially with the words 'symbolic shadow'. After he sets the scene King explains about the n***o's past and troubles. He shows this with repetition of the words 'one hundred years later'. This is showing that one hundred years later the n*****s are still not free. Towards the end of this paragraph he uses gradation to build up the climax of a metaphor, 'take the tranquillising drug of gradualism'. ...read more.

He uses different parts of America such as 'the red hills of Georgia' and 'the state of Alabama' to show that he is helping all of America. He uses antithesis about his four little children not being 'judged by the colour of their skin, but by the content of their character.' After this he builds up to this big climax which s showing that with this faith they will be free again. King uses the American National Anthem in his speech to show that the words in this song are saying 'let freedom ring'. He uses this statement for different places in the United States. The mighty mountains of New York and the prodigious hilltops of New Hampshire are for the North-eastern of Untied States, Stone Mountain of Georgia and molehill of Mississippi are for the southern states and the snow-capped Rockies of Colorado and the curvaceous peaks of California are the western states. Elei Weisel delivers his speech by trying to make you imagine what it was like. He uses repetition of the word 'less' and puts words in front of this to make the victims stand out, such as 'stateless, faceless and nameless'. ...read more.

This is showing that many people don't care as he uses the words 'where else' suggesting this and that is the only possibility. Both speeches end by looking towards the future. Martin Luther King ends on a note of determined optimism whereas Elei Weisel is less confident. Martin Luther King delivers his speech at the end by continuing the repetition of 'letting freedom ring' in every house everywhere in the U.S.A. and that different religious people can join hands and sing. The last line shows that Martin Luther King is optimistic because he repeats the words 'free at last' which state he's hopeful for the future. However King was assassinated in 1968, but his dream of a country without racial discrimination lives on today. I believe Martin Luther King's speech was powerful and effective because he used many devices to affect what he was saying especially repetition which I can believe that the words that are repeated stay in your mind. Elei Weisel delivers his speech at the end by trying to remember the children who died. He is not as optimistic as Martin Luther King but at then end he repeats the word 'weep' which I can believe sums up Auschwitz. A chamber full of innocent people dying. He was a survivor of Auschwitz so he went through all this and can know the whole truth of Auschwitz. ...read more.