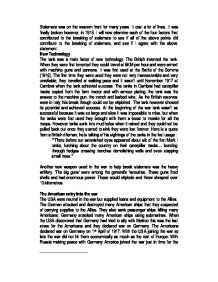 Stalemate was on the western front for many years.

Stalemate was on the western front for many years. It cost a lot of lives. It was finally broken however, in 1918. I will now examine each of the four factors that contributed to the breaking of stalemate to see if all of the above points did contribute to the breaking of stalemate, and see if I agree with the above statement. New Technology The tank was a main factor of new technology. The British invented the tank. When they were first invented they could travel at 6KM per hour and were armed with machine guns and cannons. It was first used at the Battle of the Somme (1916). The first time they were used they were not very manoeuvrable and very unreliable, they travelled at walking pace and it wasn't until November 1917 at Cambrai when the tank achieved success. The tanks in Cambrai had caterpillar tracks copied from the farm tractor and with armour plating, the tank was the answer to the machine gun, the trench and barbed wire.. As the British reserves were in Italy this break though could not be exploited. The tank however showed its potential and achieved success. At the beginning of the war tank wasn't as successful because it was so large and slow it was impossible to miss, but when the tanks were first used they brought with them a boost to morale for all the troops. However tanks sank into mud holes when it rained and they could not be pulled back out once they started to sink they were lost forever. ...read more.

they still managed to give the allies a massive advantage in august 1918 when 400 tanks rolled over enemy trenches in the great allied offence at Amiens. The tank however showed its potential and achieved success. At the beginning of the war tank wasn't as successful because it was so large and slow it was impossible to miss, but when the tanks were first used they brought with them a boost to morale for all the troops. However tanks sank into mud holes when it rained and they could not be pulled back out once they started to sink they were lost forever Also during this battle the plane established itself as an extremely active piece of machinery and 800 of them flew toward enemy lines supporting the infantry and tanks, the plane was initially used solely for reconnaissance but more toward the end of the great war they were suddenly called upon to start dropping bombs and fitted with fairly accurate machine gun firing systems, where as before pilots would lean out of their windows and shoot pistols at the enemy. The British Naval blockade of German ports was a crucial factor in the Allied victory over Germany. Despite losing many ships during 1915, the purpose of the blockade was to prevent supplies getting through, thereby starving the German people of food, which would then turn them against their government, forcing them to end the war. The blockade would also prevent supplies and food getting to the German troops. In 1916 the Germans tried to destroy the blockade but failed. ...read more.

One thing that Germany did have in its favour was the ' Russian withdrawal'; Ludendorff could now bring all his troops from the eastern front over to his crippled western lines. The German offensive failed and so it became a reason for the breaking of the stalemate. The German offensive, 1918 might not have been so aggressive or even have taken place if it wasn't for the American involvement in the First World War. Ludendorff realised there was no way his forces could withstand new, fresh U.S troops and all their weaponry that comes with them so he took the risk!coaa aar seaaaaw oraa aak inaa foaa aa: So in answer to my original question, were all reasons equally important in the breaking of the stalemate on the western front? I think yes because each reason supports one another and no one, single reason can stand alone.coed edr 4 The Americans entered the war at around the same time that Russia withdrew from it. This helped to once again tip the balance of forces towards the Allies. In 1917 the Germans were running out of manpower and had to start recruiting schoolboys to fight in their army. The Americans provided fresh new troops, who were not tired from months, if not years, of fighting like the German, British and French troops were.codf dfr sedfdfw ordf dfk indf fodf df. The Americans had, even before they entered the war, provided a great deal of aid. After April 1917 they still continued to do this.cobg bgr sebgbgw orbg bgk inbg fobg bg; In conclusion, I think that the American entry into the war was a very significant factor when it came to the stalemate being broken ...read more.