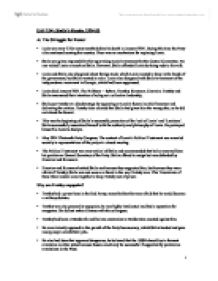 Unit 1D4: Stalin's Russia, 1924-53 A: The Struggle for Power * Lenin was very ill for many months before his death in January 1924. During this time the Party elite continued running the country. There was no mechanism for replacing Lenin. * Stalin was given responsibility for supervising Lenin's treatment by the Central Committee. No one visited Lenin as much as Stalin. However, Stalin offended Lenin by being rude to his wife. * Lenin and Stalin also disagreed about foreign trade, which Lenin wanted to keep in the hands of the government, but Stalin wanted to relax. Lenin also disagreed with Stalin's treatment of the independence movement in Georgia, which had been suppressed. * Lenin died January 1924. The Politburo - Rykov, Tomsky, Kamenev, Zinoviev, Trotsky and Stalin announced their intention of ruling as a collective leadership. * Stalin put Trotsky at a disadvantage by appearing at Lenin's funeral as chief mourner and delivering the oration. Trotsky later claimed that Stalin had given him the wrong date, so he did not attend the funeral. * This was the beginning of Stalin's successful promotion of the 'cult of Lenin' and 'Leninism'. Stalin successfully associated himself with the authority and philosophy of Lenin. He portrayed himself as Lenin's disciple. * May 1924 Thirteenth Party Congress. The content of Lenin's Political Testament was revealed secretly to representatives of the party at a closed meeting. * The Political Testament was very critical of Stalin and recommended that he be removed form his position as General Secretary of the Party. Stalin offered to resign but was defended by Zinoviev and Kamenev. * Zinoviev and Kamenev backed Stalin not because they supported him, but because they were afraid of Trotsky; Stalin was not seen as a threat in the way Trotsky was. This Triumvirate of these three leaders came together to keep Trotsky out of power. Why was Trotsky unpopular? ...read more.

How did life change for the peoples of the Soviet Union * On the face the results were impressive. Industrial production rose by about 400% in the 1930s. * Education and housing improved literacy increased rapidly. * Women were given equality for the first time. By 1940, 40% of workers were women. Creches were set up in factories to allow women to work. * The number of doctors increased and medical treatment improved. * The new constitution that was introduced in 1936 also looked very impressive. It guaranteed democracy, equality, freedom of worship and political freedom, amongst other things. * But it did not amount to anything in reality. The needs of the Communist Party could override all other considerations. The real facts of life in the Soviet Union were very different. * The Five Year Plans increased production, but not quality. 50% of tractors broke down. Managers of plants cheated in any way they could, because if they did not reach the target figures they might be shot. * A seven day week was introduced. Absence from work became a crime. Skilled workers were not allowed to leave their jobs. An internal passport was introduced. * Industrial workers were given higher pay and rewarded with medals. Some social security benefits were provided. * As more people crowded into the cities to work in industry, living standards fell. Pay did not keep up with rises in prices. Stalin used the secret police to force people to accept his changes. * Agricultural production suffered as Kulaks destroyed their crops and animals, rather than hand them over. In 1932 to 1934 there was a massive famine which killed 5,000,000 people. * People who objected found themselves in slave labour camps, called Gulags. These were often in Siberia or in Northern Russia, where the weather in winter was very cold. * Here they worked with little food for ten years or more. ...read more.

* There was an annual purge of the party post war of some 100,000 members and all supposedly 'cosmopolitan' influences were attacked. * In 1949, the Leningrad Communist Party was purged in what became known as the 'Leningrad Affair'. * Under the supervision of the chief of the security police, Abakumov, evidence was falsified against leading party and state officials including Politiburo members Voznesensky and Kosygin (the former being eventually shot). * Russification was the suppression of non Russian nationalities within the Empire. Those nations within the Empire which were considered to be anti Russian were attacked. * Ukrainian nationalism was suppressed and Soviet Jews came under attack, particularly after the declaration of an independent Israel in 1948. * Such was the nature of the Stalinist state that any supposed 'dual allegiance' on behalf of Soviet citizens was completely unacceptable. A leading Jewish actor, Solomon Mikhoels died in suspicious circumstances in 1948 the same year that the Jewish Anti-Fascist Committee was closed down. * By 1945, perhaps one tenth of all Soviet workers were forced labourers and yet this was still a woefully unproductive form of labour. What it was, however, was captive, controlled and expendable and in the short term that is what the regime's policy demanded most. * The rapid modernisation programme demanded complete acquiescence from the labour force as any form of questioning or doubt could signal disaster, such was the economy's permanent state of crisis. This helps to explain why forced labour was continued after 1945 when the regime seemed to have defeated its enemies. * The devastation caused by the war and the onset of the Cold War, resulted in plans which aimed to restore the industrial base and build the technical and defence industries. * As in the early 1930s, there was a foreign threat to counteract (that of the USA and her allies) and therefore a real urgency to build. In this atmosphere, human considerations continued to be ignored in contrast to the priorities of the plan. ?? ?? ?? ?? 1 ...read more.