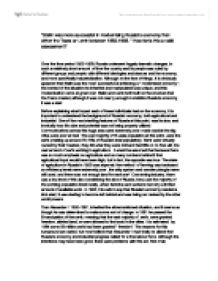 Stalin was more successful in modernising Russias economy than either the Tsars or Lenin between 1855-1956. How far is this a valid assessment?

"Stalin was more successful in modernising Russia's economy than either the Tsars or Lenin between 1855-1956. " How far is this a valid assessment? Over the time period 1855-1956, Russia underwent hugely dramatic changes, in such a relatively short amount of time the country and its people was ruled by different groups and people, with different ideologies and stances and the economy, and more specifically industrialization. Although on the face of things, it is obviously apparent that Stalin was the most successful at achieving a " modernised economy ", the context of the situation he inherited and manipulated was unique, and this modernisation came at great cost. Stalin and Lenin both built on the structure that the Tsars created, although it was not nearly enough to stabilize Russia's economy, it was a start. Before explaining what impact each of these individuals had on the economy, it is important to understand the background of Russia's economy, both agricultural and industrial. ...read more.

Concerning industry, there was a low level of this also considering the size of Russia, because the majority of the working population lived rurally, urban factories and workers had only a limited amount of available work. In 1855, it is safe to say that Russia's economy needed a kick start; it was starting to become left behind and was being outranked by the other world powers. Tsar Alexander II 1855-1881, inherited the aforementioned situation, and it seems as though he was determined to make some sort of change. In 1861 he passed the Emancipation of the serfs, meaning that the vast majority of serfs, were granted freedom, allotted land, or were allowed to find work in the cities. It is estimated by 1864 some 50 million serfs had been granted " freedom". The reasons for this turnaround are varied, but most believe that Alexander II had finally realized that Russia's economy and industrial progress called for a free labour force. ...read more.

Although these numbers seem positive, considering the vast population and potential Russia had, these increases could have been much higher and are only just a start. Under Alexander II the state bank and ministry of finances in 1860 was established, giving the capital a strong position. Alexander III (1881-1894) took on a slightly less sympathetic position than his father, after Alexander II's assassination, his son believed that the only way forward for Russia was one through traditional autocratic ruling. One of his biggest shortcomings was the fact he emphasized hugely on industry and failed to utilize the potential of Russia's agriculture. Although this was negative, some advancement in industry was seen, such as the huge amount of railway development, namely the near completion of the vastly important trans-Siberian railway, and the production of coal doubled between 1892 and 1902. The policies of Sergei Witte had effects from this reign into that of Nicholas II. Investment from abroad and state subsidies to heavy industry all played a part in stabilizing the economy. However, the neglect of agriculture contributed to the 1891 famine. ...read more.